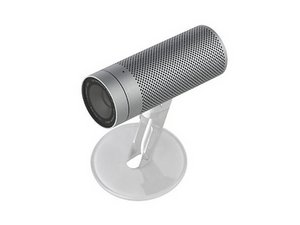 Repair guides and support for the external iSight webcam by Apple released in 2003.

Just got in a vintage Apple iSight Webcam. Used my iTunes account for the account. Set my audio volume in System Preferences -> Input -> iSight. Input level appears fine. Mute is NOT checked. Output volume set to max. Initiated call to a iPhone 4 via address book. I initiated connection via my MacPro and I could see and hear him just fine. He could see me but not hear me. I had him call me and got computer ring and answered. Same result, I could see and hear him, he could only see me.

I tried the camera out using iMovie and the recording level was fine, so the camera and microphone work OK.

OOps: Sorry I forgot to hit the Bose Speaker On dial. It works great now. But that picture needs help from the iSight FireWire. Oh that was you!!!

for Mac Requires Mac OS X v10.6.4 Snow Leopard or later. if either of you are not using SnowLeopard that could be a problem.

Jobs said,. . . “FaceTime is based on H264 video … and a bunch of alphabet soup acronyms. We’re going to the standards bodies tomorrow and making Facetime an open standard.”

Obviously then from your data the audio from that camera is not of sufficient compression to work.

Remember to return and mark accepted the answer that best solves your problem.