Four days into my one-week crash course in board repair and microsoldering, I still had big questions. I’d learned a lot about diagnosing boards and reading schematics, and been through the tough learning curve of microsoldering. But some things kept coming up in class that were only quickly explained, or hand-waved as a big issue we didn’t have time for.

Why did Jessa Jones’ data recovery and board repair shop, iPad Rehab, specialize in iPhones and iPads? Why did students have access to nearly every Apple devices’ schematics, but hardly any Android devices, besides the major Samsung phones? And why did China come up dozens of times each day in class?

Many of the issues and dynamics of board repair are similar to the parts replacement world we’re familiar with at iFixit. We all could definitely do more to fix more devices on a deeper level, and prevent e-waste. But it’s far from a simple problem.

Why Aren’t There More Android Board Repair Options?

If you have an iPhone and it breaks in some common way—a screen, a dying battery, a busted speaker—you have a lot of options for fixing it. Workers at Apple Stores, Authorized Service Providers, or in the Independent Repair Program (such as it is) can take it. Nearly any independent repair tech that fixes phones will work on an iPhone. You can, of course, fix it yourself. For deeper problems, Jessa’s iPad Rehab and other microsoldering shops will take a look. At the least, they can probably get your data off the device and backed up—something Apple Geniuses themselves often can’t do.

If you’re holding an Android phone, your options are far more limited, depending on the maker and model. Samsung and Google’s Pixel devices have some authorized repair partners, like uBreakiFix, that you might find locally. Other chains and independent techs may offer repair services, but often at prices that the average person can’t rationalize, especially if they can “upgrade” their phone under a provider contract.

In specific terms, a replacement screen for a Samsung S9 is about $200; a whole used S9 phone goes for about $200 right now. There are a few reasons why this is so, some of them intentional on the part of Samsung.

If you’ve got a deeper board issue, your best best is still a popular Samsung model, or that the issue can be diagnosed at a glance (as with my Pixel 2). Schematics are not floating around for any but the most popular Android phones. While you can buy some schematics from Samsung, not all board repair shops are going to bother with a deep fix, unless the data is very valuable to you.

The shortest explanation for all of this is the capital-M Market. While there are many, many more Android phones than iPhones, iPhones hold their value far better than any Android phone. Why? A few reasons:

For all those reasons, many repair technicians, at least in the U.S., feel more comfortable working with the known bread and butter of iPhones than the many wild strains of Android phones. Aftermarket parts for iPhones are more common, versus more expensive original parts or refurbished parts in inconsistent quantities. Board repair techs need schematics to diagnose and fix problems, and you can find a schematic for nearly every iPhone, because it’s worth the risk for someone (usually overseas) to grab it and sell it.

More than anything, though, it comes down to the customer, and what they want out of their malfunctioning phone.

Jessa’s shop offers warranties on some of its repairs, like Audio IC repairs for the iPhone 7. But its core work, data recovery, doesn’t guarantee a fully functional device when it’s returned. One of the students in my class asked Jessa about offering more kinds of working phone repairs, with warranties, in a side discussion during class. Her answer was straightforward.

“You don’t know what you’ve got until you get into it,” Jessa told the student. As a result, a board repair tech might not be able to fix every function on a severely damaged phone, even with a good amount of work. “The customer might tell you they’re okay with that, but if they get it back and don’t like it, now they’re going to think about what they spent to get it fixed, on top of what they have to spend on a new phone. And they’re going to blame you, whether that’s fair or not.”

If that’s the dynamic with an iPhone that’s still relatively valuable on the used market, it’s even stronger for Android devices that are worth notably less after a year or two.

So iPhones (and iPads, and MacBooks, to a lesser extent) are the path of least resistance for a board repair shop. There are more repair possibilities, and parts, and opportunities to be had in fixing them, both at the parts and board level. But there are also many pitfalls in tinkering with Apple’s products, and more seem to be on the way.

As Jessa noted on day one, a big issue is iCloud Activation Lock. Anyone who forgets to turn off one of the most common iPhone features, “Find My,” before wiping or selling a phone has turned it into a brick. Swapping batteries and screens on newer iPhones leads to warning messages that might discourage repair customers.

These warnings don’t concern Jessa much, at least as they exist now. Customers, she said, have a right to know what’s inside their device, especially if they’re buying used. But what really concerns her is where Apple might be headed: serial numbers and device-locking on more and more components, possibly even on the logic board itself. Once Apple starts taking away functionality or blocking third-party parts and components, rather than simply warning about them, they can effectively cut out the non-authorized repair market almost entirely.

This might sound paranoid, but only if you haven’t been watching. After the iPhone 11 models came out, we felt compelled to compile which parts are replaceable and which are not. Read that post with a keen eye, and you’ll notice that parts that seem interchangeable, like between the iPhone 11 Pro and 11 Max, refuse to work when swapped.

Right now, if a customer’s iPhone suddenly stops charging properly, Jessa’s shop can replace the damaged Tristar chip with readily available replacements—they’re popped off a circular roll like garage sale price stickers. But as more and more parts of the iPhone require being plugged into an authorized repair tech’s computer to work at all, it seems only a matter of time until Apple looks to its own logic boards for further control.

China, the Problem and Solution

Much of what makes board repair possible today is due to companies’ reliance on China and other overseas countries for manufacturing.

China is the source of many of the tools used in class and in the shop, like the iBridge that makes it easier to test port pins, and the True Tone reprogrammer that improves screen replacements. Most of the schematics we use in class arrived on the internet from Asia, based on their overlaid markings. As noted in part one, the most popular board repair software, ZXWTEAM, is hosted in China. It’s a pretty fair bet that if Apple could, it would shut down an app that provides the schematics for its major devices.

It’s not lost on me that Asian manufacturing, so easily equated with the loss of American manufacturing jobs, has also made much of the third-party repair market possible (iFixit included), and allowed Jessa and other board repair pros to ply their trade. Spend just a few minutes on YouTube inside a search for “Shenzen” and “phone repair,” and you’ll see a culture where almost any device can be fixed, soldering work is common, and not much is said about “genuine” parts or “authorized” repair.

Some of what iFixit and others are fighting for in Right to Repair legislation would make some parts of the repair chain easier to access, without the reliance on international arbitrage (read: disregard for U.S. law). But China’s role in the repair market will be pivotal for quite some time.

Even with a world’s worth of knowledge at my fingertips and a week of board repair training, I am by no means a pro. I’m not particularly skilled at soldering, wire work, or even board diagnosis. That, Jessa says, simply takes “time in the chair.” My brain is still a bit mushy when it comes to understanding how a MOSFET actually works. And, honestly, I’m still a bit of a wimp when it comes to handling open devices, despite a week’s worth of desensitizing.

But there is a big difference between me, the writer who drove into Honeoye Falls a week ago, and the person walking out of iPad Rehab. When I look at devices, I don’t see a rectangular slab of alchemy dreamed up by Google or Apple or LG, made in factories I’ll never see, accessible only through ports and cables. I see circuits, and I see potential. You don’t have to know how to design a phone to make a phone work again.  You just have to put in the time to figure out what the phone wants to be doing with the power it’s given.

This kind of “deep magic” repair could be anywhere. People can do this, if we don’t lock them out. I took more classes in Milton than in electronics, and I replaced a microchip, ran a jumper wire, and got pretty handy with a multimeter. Companies have had too much success convincing customers to give up on phones that have “something wrong with them.”

After what I saw during my week, I think there’s something wrong with our relationship with our devices. But just like those devices, if we work at it, we can fix it. Take a look inside your junk drawer, watch a video (or read a guide) on fixing something, look into the movement. It’s easier than you think—ask someone who used to be afraid his phone would shock him. 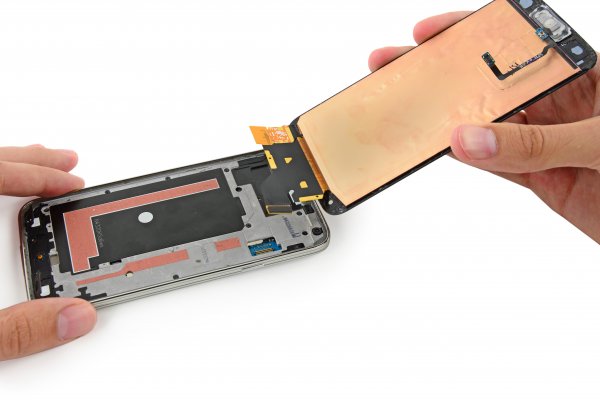 Your experience of this new world is very good.  I have been working with Micorsoldering on iPhone boards for a year now in my workshop in Uruguay and it is as you say it is a new way of understanding repairs and gadgets.