How To Replace Custom-cut Adhesive For Samsung Phones

Written By: Arthur Shi (and 3 other contributors) 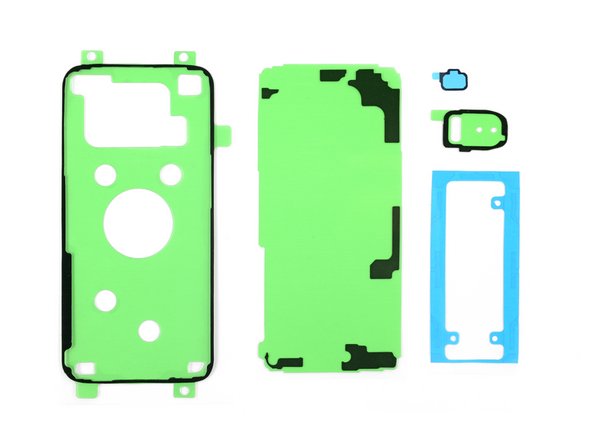 Not sure what to do with all the adhesive strips in your fix kit? You’ve come to the right place! This guide shows how to use the adhesives in your kit for Samsung phones with glass backs (S7 and newer). It also includes instructions on how to transfer and install various back cover components, such as the rear bezel and fingerprint sensor.

You may not need to use all the adhesive strips included in the kit. If you are transferring the fingerprint sensor, you may need some double-sided tape such as Tesa tape.

When applying adhesive strips like these, here are some general tips:

103 other people completed this guide.

The flex cable for the fingerprint sensor is so short and delicate that it’s fiendishly difficult to locate and snap in. You only have a very narrow gap between the back cover and the phone, it wants to jump out of position if you misalign at all, and you can’t reach under there with normal size fingers. Not only that, it’s done with the rear cover adhesive in place so if that touches, it sticks.

If you bought the back cover from iFixit, please contact our support team here and we will get a replacement sorted out for you!

P.S. I got the battery and cover because the old cover was warped and separated, figured may as well replace the battery in a 2-year-old phone. Turns out, the battery was swollen and huge and it had pushed the back cover open. Not a good situation. So if your back cover is coming off, suspect that battery.

P.P.S. The fingerprint sensor flex cable connector probably could be manipulated into position with the tweezers from the tool kit and pressed down into place with the plastic screwdriver thingy, Just hover the back cover over it with your third hand (or a helper).

Will the phone still be water-resistant after this repair?