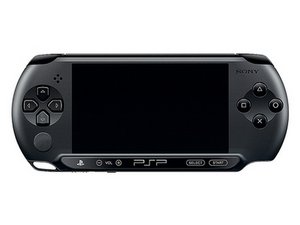 The PSP E100 is a handheld games console designed by Sony. Also known as the PSP Street, this budget-friendly version of the PlayStation Portable released in October 2011.

Author: solomon (and 7 other contributors)
Create a Guide
I Have This
Do you know which kind you have?

The PlayStation Portable E1000—also known as the PSP Street—was a handheld console released by Sony in October 2011 for consumers in the PAL region. The E1000 featured the same 4.3-inch screen from the original PSP 1000 and used UMD or Memory Stick PRO Duo media for loading games. The design of the E1000 was focused on reducing cost, and the device lacked features from other PSP models including Wi-Fi, physical brightness buttons, and a microphone. This model was originally sold for 99 Euros.

While the E1000 only featured a mono speaker, the well-known interlacing issues present on the PSP 3000 were fixed for the release of the E1000. Unfortunately for enterprising repairers, the battery in the E1000 is fixed in place, unlike previous models which used a swappable battery.

The PSP Street came in matte black or “ice white“ (released later in 2012) and was thicker than the previous PSP 2000 and 3000. You can identify the E1000 from the sticker on the bottom of the console, where the model number “E100x“ (x varies based on your region) will be printed. You can also look for the speakers on the console: the E1000 is the only model with a single set of speaker holes to the left of the screen, as shown on Wikipedia.

The entire PSP line was eventually replaced by the PlayStation Vita in 2012.