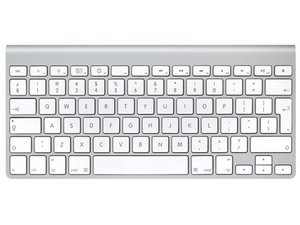 Repair guides and support for your Apple Wireless Keyboard. Connect and command your Apple computer wirelessly.

one end of space bar not working

left side of space bar does not work--right side ok.

how to remove space bar and repair.

Steps 14 and 15 of this guide will show you what it looks like: Apple Wireless Keyboard (A1255) Teardown

I don't know how this exact model is, but I can give some general advice. Most keys can be removed from the keyboard by gently prying them straight up. This is done by prying evenly from both sides using what iFixit calls a metal spudger (a non-pointy knife of sorts).

After the key pops off the mounting clips, be very careful, since there may be some small parts (such as a spring) that might pop out and get lost. This isn't too common, though. Also, be gentle, since some plastic bits can be damaged if you try to force them out by twisting.

A spacebar typically contains a "stabilizer wire" that goes from end to end, and its purpose is to pull one side of the key down as you push on the other side, making the whole bar go down evenly.

If your spacebar is wobbly, then probably this wire has either slipped out from its hold-down brackets, or it's become detached from its mounting clips.

This, this really helped!

On mine the keyboard actually has a depression in it, so the space bar works intermittently. I took the key off and put a small, dab of silicone in the center (there is a mark there), let it harden, trim to about 1/16th inch high, put key back on. Totally fixed it

To add to cityzen's, if you see some of dust or gunk in there from food, finger grease, etc. give it a few shot of canned air. And, while powered down clean up any sticky stuff with a q-tip and some rubbing alcohol.

thank you! you just saved my keyboard with your article :D

Note that the spacebar has four metal brackets/bars. The inner two can stay in the key itself. But the ends of the outer two must hook underneath four little clasps that are on the base of the keyboard. If not, the far ends won't work (underneath the C and M keys).

So if you see all four metal brackets when you pull off the spacebar, gently take off the outer two and hook them into the clasps on the computer itself. Then line everything up and snap it together.

This was the info I was searching for but alas to late:

How to reattach a Spacebar Key to the Magic Keyboard

I had ruined the latches. You have to be careful check out step 2 as it matters what is “up” and what is “down”. On the “down” side there are a couple of notches that need to fall into place.