How to troubleshoot logic board after water damage and corrosion?

I want to isolate the component that is preventing an iPhone 4S from completing it's GO/NO-GO checklist. It appears to enter a boot loop when plugged in. It beeps (or buzzes if the ringer switch is toggled) regularly but the screen stays black. It shows up in iTunes but doesn't seem to stay powered on long enough to stay connected. Photos are accessible briefly along with all device info.

If I take out all the internals and connect the dock connector, logic board, and battery, will the phone show up in iTunes? In other words, I want to know if I can get the phone to boot through it's GO/NO-GO checklist with restricted functionality by disconnecting all components and then adding them back one by one (e.g. if the logic board boots with nothing else connected, then I'll add on the screen or try with a known working screen, then the home button, then speakers and microphone... not really sure what the best order might be).

The phone took a salt water dive and sat for a year so there are significant signs of corrosion inside. After mild scrubbing with a sonic toothbrush and vinegar, rinsing with distilled water, a 2 minute bath in 99% isopropyl alcohol and time to dry, it powered on and entered an apparent boot loop (woo!).

I may have some corroded circuits. Most of the board is in pretty good shape, but near the battery connector there is some corrosion that appears to have eaten away at this circuit:

For comparison I checked on a working iPhone 4S, and the gold circles are much cleaner:

I successfully experimented and discovered it's possible to get a logic board to boot to a more stable state by removing components. 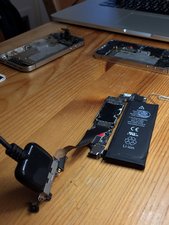 To my surprise the board booted nicely. All information was visible in iTunes and I could get photos off the phone via Aperture (iPhoto probably would have worked, too). The only problem was the board would not stay connected for more than two or so minutes at a time. So I downloaded the photos in batches of 100 - 200 at a time, each time disconnecting by USB, reseating the battery connector, then replugging USB connector to reboot the board.

As dhsrusso suspected below, there was some corrosion at the connector pieces at the top of the board (notably the camera and the screen connector). I think the board would require microsoldering to fix and the extent of the corrosion doesn't really make it worthwhile. I could try cleaning the board again, but the extent of the corrosion and the fact that it won't even stay booted on its own means there are probably too many problems to fix on this board.

the gold circles are test points--not required for function. keep the circuit writer pen away from your logic board always.

You are correct in your analysis---yes you can boot a board out of the housing.

Yes the board would require not just microsoldering, but extensive component replacement to function again--the gold circles are not important, but all the tiny completely corroded SMD components---like the one shown in your picture for example can be required.

Yes this board is unlikely to be restored to full function even with hours and hours spent microsoldering.

Water damage restoration depends on removing the corrosion and oxidation relatively quickly after the event. or being lucky.

Thanks so much, Jessa! I learn so much from your posts. I scoured the web to find out about those gold circles and come up with very little. I appreciate your input!