I have a MBP 13" 2010 where the old HDD was somewhat damaged. It could only boot up in safe mode and was very slow then. I bought a new HDD and HD cable.

So I don't really know what the problem could be?

Have contacted the HDD service provider, but no response so far.

Can it be anything else than than the HDD or the cable? What if I have broken something else than the cable or HDD, could that maybe be the problem? Because I found this thing laying on my table as you can see in picture 1 and 2. 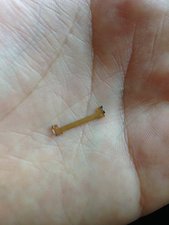 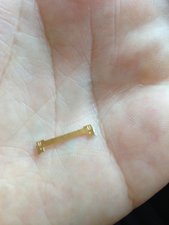 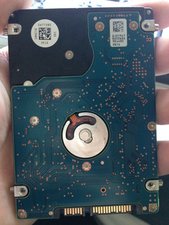 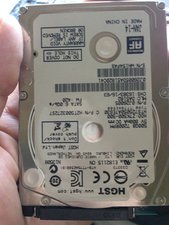 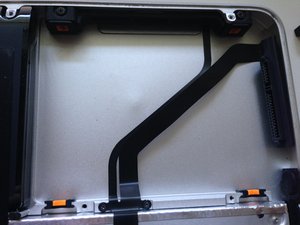 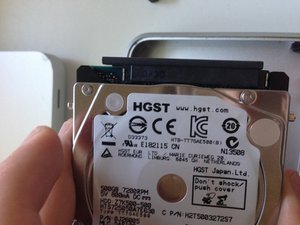 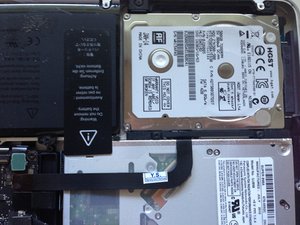 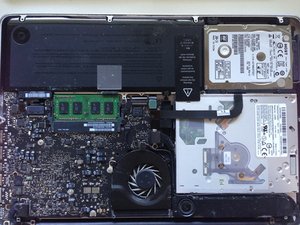 Don't know how to insert pictures without "answering"...

But I'm pretty sure the lock is from the screen cable (or so I was told). It's the cable right here (the lower left corner in the last picture of my last "answer". 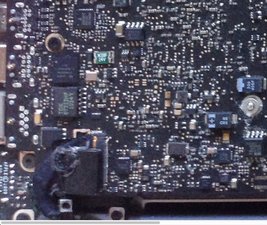 It happened when I pulled the cover off, because some glue was stuck to the cable and cover. Pretty sure it's that, but not sure. But if it the screen cable, could it still be the problem?

No one got any ideas for a solution?

Additional information on the make and model number of the hard drive might help. Plus the source of this cable and if it's new or used.

I got an answer from, HSGT, the service provider. They said the following could be the problem: 1: DOA. 2: "The MBP did come with a 5400 RPM SATA II 3.0 Gb/s hard drive originally, and it could be a power supply issue, since the 7200 HDD takes one Watt more power for startup current than a 5400 RPM drive. The drive should work for this installation." But could any of this be the problem, if I can hear the hard drive spinning?

A computer component in your hand is not good -yes it could be the problem. I'm not certain but to me it looks like a connector or ribbon cable lock. If the cable or connector is not making good solid connection - guess what happens? The OS can't find the HD so there's no boot system to load. Spinning HD sound only means the drive motor is getting power to, at least, start spinning up.

Recheck your connections.... check that the SATA version of the new HDD matches that of the old one.

If this answer is acceptable please remember to return and mark it.

That part is the cover for the LCD connector, see step #9 of this guide: MacBook Pro 13" Unibody Mid 2010 LCD Replacement

I do not believe this has anything to do with the hard drive issue. I think you got a bad cable. Hook up the old drive and boot up using the command R and see if the drive is seen.

Thanks for the answer. CMD + R and then Disk Utility didn't find anything. I noticed something when changing the hard drive: The new one is thinner than the old, don't know if that can have anything to say?

Tested the harddrive on an old Macbook (white plastic) from 2007, and it could see the hard drive. So I assume that leaves a new cable as the only option, so I'm gonna order a new one and wait and see.. :-)

Received the new cable, but still no connection. I know the hard drive is working and this is the third cable or so I try without luck. What can be the problem now?

You can also try your hard disk on another system; if there it recognize the please check your SATA cable or you can also contact your HDD Service provider.

I'll try recheck the connections. But what I don't understand is that the old HDD isn't detected either and as the hard drive cable is new too I can't see that as the problem either.

Is there anything in addition to the hard drive and cable that could be the problem?

The hard drive is "Travelstar z7k500 500GB" which should be compatible.

As I said check the connections are square and firmly, completely seated all along the path from the logic board to (and including) the HD. Many times DIY think they have a good connection when on a second look something was only making partial contact.

I have checked everything and it looks good, but still didn't work.

I can hear the hard drive spinning when I turn the Mac on.

When I boot from USB and use Disk Utility I can see my USB, disk 1 (OS X Install ESD) and disk 2 (OS X Base System). I do not assume any of these could be my hard drive as there is only 1 and 5 GB on them.

If your HDD is new so you can also contact your service provider..

Thanks, I'll try that.

reseat your hard drive make sure connections are fully seated., if you hear the drive spinning that's good. Does this mac have a BIOS setup? it's possible that your bios firmware doesn't support features on this drive. usually you can upgrade the firmware (get it from apple) but before you do that, take that hard drive out, and try it in another computer, doesn't matter if it's pc or mac. See if the other computer detects it, if it doesn't the drive is dead. If it does work in another computer, the issue is definitely with the mac-book, that's when I'd check on bios firmware updates. Nothing looks broke from the pictures, if you can show bios setup pictures it would help but I suspect you have a bad hard drive. Just because it's a new drive, doesn't mean the guy at best buy didn't accidentally drop it before you got it. :)

I tried the HD in a MacBook from 2007, everything worked fine there. I have even tried changing the HD cable 2 times, which didn't change anything.

But tried open the BIOS setup twice holding CMD+option+F+O during startup, but all I got was the blinking folder with a questionmark.

Mattias this an Intel Machine...Intel Macs do not have Open Firmware (only PowerMac's did), so there is no way to boot into Open Firmware. Your Macbook uses an EFI (Extensible Firmware Interface).

If you want to reset the NVRAM/PRAM, restart your machine holding down Command-Option-P-R until you hear two chimes (restarts each chime).

Have tried reseting the NVRAM/PRAM and SMC, but it didn't work.

What can be the problem?

- The HD works on another mac, so it cannot be the problem.

- The HD cable has been changed 2 times, so it's unlikely that is the problem.

Are there any other things that can cause the HD not to be detected?

that hard drive, does it have a partition table yet? As I stated previously you will likely need to upgrade some firmware. Here is a link pertaining to this situation: http://support.apple.com/kb/HT2434

Hopefully this will resolve this once and for all. You might have to install it in the other MacBook temporarily so you can use it's disk utility to format the new drive for GUID partition table, otherwise firmware update won't work.

Let us know how this pans out for you.

It was already partitioned as GUID, but I partitioned it again as GUID, installed Snow Leopard on it, and ran software update. It didn't show any EFI update, so went to check it at Apples site, and it said the MacBook (mid 2007) already had the latest EFI update available.

Have just tried the HD on a MacBook Pro 2011 early. The MBP also found the harddrive, so I don't think it has anything to do with the EFI.