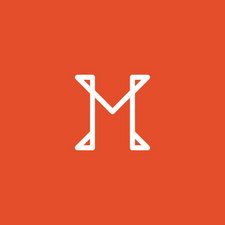 I run a small repair shop, and im encountering this problem. This issue has been constant on several iPad Minis we had tried to replace the touchscreen.

Even we support ourselves on different repair shops when something is acting fishy. And they also some times rely on us when an issue they can solve.

We had tried a variety of touchscreens and with different suppliers. And issue persists.

We had been soldering the iPad mini touch board to the new Touchscreens, but with no luck. Only the home button works.

Has anyone else encountered this problem and know how to solve it?

Thanks for your help!

definitely the bottom section of cheap digitisers not being taped off correctly next to home button. Lie the new and original digitisers next to each other. To test if this is your fault lift the digitiser very slightly away from the screen from home button end (be careful not to lift too far due to the ribbon cables underneath) and try the home button lock button screen fade etc. worked for me. Switch 2 x tape pieces (one square shaped and one rectangular ) and don't forget clear spacer tape under square section. hope this helps 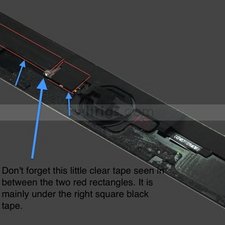 tape came away with the adhesive protective tape,had to go back and replace it after reading this

The problem lies with the circuits to the left of the home button. Cover all surface mounted chips and gold areas in kapton take. This will almost 100% solve the problem.

Thank you so much. It work perfect after covering up the section showed in the picture.

WOW, worked perfectly! I placed the kapton tape on the digitizer on both sides of the home button. 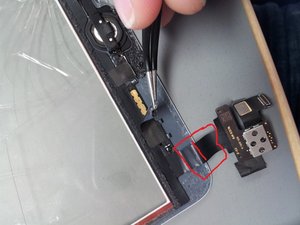 even i bough it from my trusted supplier but i end up replacing the digitizer 3 times, first i thought i it was my fault in the end i have checked both prevous flex they were damaged, i have tried to find out how it was in the first place but every time i end up with the crazy ipad jumping and selecting application, is there anyone had luck with his installation,

The little ribbon in the back must be covered. See picture. Remove the extra foam tape at the bottom. Also, the darkening is usually caused by a bad IC chip. You will need a factory one, or you can buy a new one, which means you want to buy quality. Not something cheap because cheap IC chips will do that. Check the soldering job twice. That could be the problem. Clean everything, including the connectors. 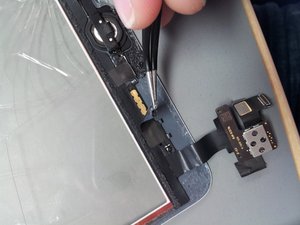 i have experienced the same issue, i have checked everything was in order, sticker, all AC were covered in proper order, after replacing the second digitizer i found out when putting the digitizer back to the frame the digitizer flex broke and there is no solution to fix, only replacement with new digitizer, i advice not to buy the cheap one as you will pay twice (BAD QUALITY)

I think you may be right here, bought 3 and they all broke even though I followed careful procedures! Lesson learnt. (Third time lucky!)

Wow after deciding not to bother with iPad Mini's some 8 months ago after suffering many of the above mentioned effects I decided to have another crack this week..........4 replacement digitisers later!!!!!!! I might have cracked it. I cannot express how high my blood pressure must have been during this repair. Every time the touch screen was going mad.

It turned out that I was pinching the digitizer flex cable and causing it to break. I remembered from last time that i needed to cover all of the exposed copper and circuitry, but I just couldn't work out what i was doing wrong until finding this page.

Each of the digitizers appeared to work fine up until I tried mounting the screen. In the end I placed a bit of UPVC electronic tape either side of the flex cable (hoping to give it a little more strength).

When mounting the screen start with the top of the device leaving yourself a gap at the home button end. This way you can see how the flex cable is bending. I used a spudger to gently encourage the flex to bend into the cavity where the LCD cable is.

Be very careful though as one of the screens popped up slightly and i pushed it down again not realising that the flex had got between the glass and frame again. DOH....that was onto screen 4

This is a really frustrating repair, but it would definitely pay to invest in better quality screens.

Does anyone have a decent supplier in the UK?

I have an IPad Mini 2 I just replaced my screen over the digitizer. Now the digitizer is very dim. I can only see the apple sign when I turn it on, if I hold down the power button all I can see is the X where you would exit it out from powering off. What should I do.

You forgot to disconnect the battery and your backlight shorted out. Go to eBay and buy a repair for the backlight

You didn't disconnect your battery and now you have a backlight fuse blown. Go to eBay and buy a repair for this and send your iPad out to get fixed

If your iPad accidentally powers up and then you connect the LCD, it won't light up. Disconnecting the battery shuts it down and allows you to then connect the LCD.

As for the iPad mini jumping around after a digitizer replacement, thank you to those who suggested covering the bottom of the digitizer with tape. Be sure to put it all across the bottom. Worked like a charm! Wish I would have read these posts 3 hours ago!!!!

what is the digitizer?

selotape across the bottom edge of the digitizer not just the home button cable works a treet.

hello i just replaced the glass on an ipad mini and now touch screen does not work. unit turn on normally and respond to voice commands but does not respond to finger touch. any idea. unit was working perfectly fine even with the broken glass. thanks

Read back through this entire thread. There is a lot of good advice for the issue that you are describing. I would also put out there to everyone that it cannot be stressed enough that the battery needs to be disconnected or isolated on iDevices before replacing digitizers and/or LCDs. It will save a lot of heartache. Also, pay attention to where the manufacturer had tape when disassembling your device. Generally speaking, manufacturers do not like to waste money and they prefer to make their product at as low a cost as possible, this means that if there is tape in a particular spot, it probably serves a purpose!

Best of luck to everyone!

I have the same issues with my ipad Mini digitizer replacement, only home button will work.

My screen did come with tape across the back of the flext cable on the screen and around the some of the flex near the connector, i pulled this off!

Is this likely to be my problem? And can i replace the tape with normal sellotape or does it have to be a particular type of tape?

Ireplaced the digitizer screen and lcd pad and the slide to unloick doesn't function or power off slide function. What did I do wrong?

I am having the same problem!!! I to work on iPhones and iPads and the iPad minis are driving me crazy

My issue was whenever I pressed anywhere on the bottom of the digitzer siri would be activated or I would be sent to the login keypad. I taped all exposed gold to the left of the home button and it worked. I used electrical tape which may not be the best but seems to be working.

I just had my screen replaced and my iPad mini is still adjusting to the new screen. How long will this adjusting period take?

What do you mean by a just Christopher? A new screen should not have to adjust, and should work the moment the repair is finished.

I just replaced my screen and only the lower half of the screen is working any suggestions? All copper is covered with tape

Hi, your connector touchcreen in the logic board are broken. See with a microscop, you see pins broken !! Sure

Sounds like it's maybe a bad LCD!!!! Or has a short near the home button? As the iPad lcd's are well known for a shorts causing problems!! May I ask where you bought the LCD from?

I bought it off eBay. The seller is trust worthy because I bought other digitizer from this seller but now problems until now. And I have a bad feeling it's a logic board error

Its not the LCD. this LCD I'm using was the original LCD on my ipad

Hi, guys. I am desperately in need of your help. I have an iPad 2 and unfortunately the screen shattered when my iPhone 6sPlus fell on it. So, I took it to a repairshop to have the LCD screen repaired. True enough, the repairman did his job well on replacing my iPad 2's screen. However, when I turned it on, and I was really ecstatic at the time I got it repaired, I immediately went to the settings to connect it to our wifi connection. The sad thing is, it cannot find any wifi, be it a modem-generated wifi or my personal hotspot. Can you help me on this dilemma of mine. Your replies will be very much appreciated.

My money is that the WiFi antenna connector has been compromised in some way!

No. I hope this helps. Vote Quimby.