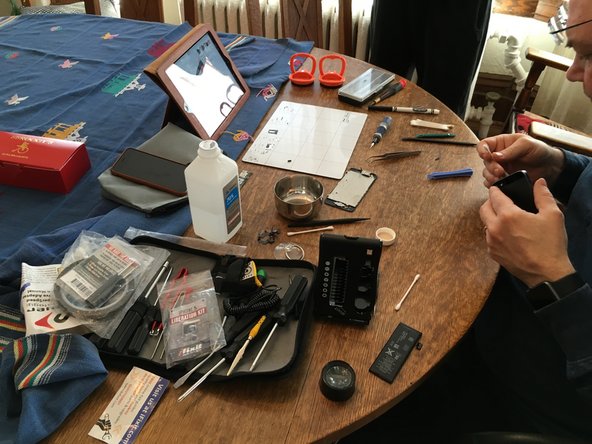 A friend put their iPhone into a cup of soda, thinking it was the empty cupholder in the car. Ooops! Then they took it out a few minutes later and tried to use it right away. Sigh. I got the phone a week later with the complaint that it would not even charge.

The first bit of repair was removing the grain of rice stuck in the lighting port. I guess there are drawbacks to the rice-dry method my friend had tried. The phone kind of worked, but had some difficulty holding a charge, very sticky buttons, and a fascinatingly disfigured screen. I decided to open it up and clean off all the parts and buttons individually. Unfortunately, I struck out on step one: it took so much effort to pull the screen from the body that I ripped all the ribbon cables off the screen. Drat! I proceeded with the cleanup anyway, and ordered a new screen. Bottom line, everything works!

Soda can add an extra challenge to prying the screen off. This phone was so sticky that even the iSclack did not budge the screen. I learned to keep an extra tight grip on the top of the phone while prying apart the bottom with stronger suction cups. Luckily, in my case the screen was already damaged, but it still did not feel good to rip those cables the first time around!

I'm not sure if it was the soda or not, but removing the home button contact points was also more difficult than I expected. Going slow with patience paid off, though. Those little gold bugs will move, eventually!

how about soaking in deminerilized water?