Hi, Hope you are all well by the grace of Almighty ALLAH. I'm from south Asia. It's been a few months, I'm facing overheating issue on this device. I've been using this mac since October 2020. Please help me, with how to fix the overheating issue.
Thanks in advance. 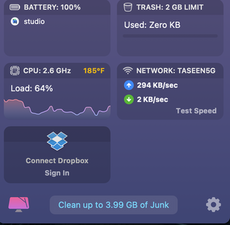 I think what you’re seeing is a bug with clean my mac X rather than your machine!(if it’s telling you directly that’s it’s over heating)

To put this into perspective the 129℉ equals to 53.9℃ so while its warm it's not in the kill zone.

You really need to get a better app to monitor your systems temps and help you push the fans a bit more when its getting too warm.

Even still over time your system will get choked up with dust and will need a good clean.

Not good ;-{ Your heatsink has failed!

Also what are you running at this time point?

I prefer the apps full screen mode as I can see the high water marks and can see the fans RPM's. Even still it's clear here.

Honestly, the temps in this model were less than stellar to begin with, especially depending on which CPU you had, but this is definitely warmer than expected.

First thing I would do is just open the machine up and have a look. Check and make sure everything on the internals looks clean and dust free. Clean it up if not. I have seen Macs where the output of the fan is just clogged with dust and debris, effectively choking off the CPU by not allowing any of the hot air to escape, even if fresh air can come in.

But I agree, this could also be an issue with the Heatsink. It’s pretty unusual for those to fail, but its certainly not out of the realm of possibility and could account for much lower GPU temps if the failure is on the CPU side. It could also be a failure of the fan on that side.