I have a late 2011 15" MacBook Pro that at the end of 2016 had the logic board replaced under the GPU replacement program. So the Logic board is 7 months old. The computer is in great condition, never dropped or misused. Randomly the machine wouldn't start and it was giving me the three beeps, signaling a RAM issue. I tried reseating, replacing, cleaning the sticks and the slots. Nothing. Then I used just one stick and it worked. The bottom slot (when the computer is laying on its lid) is faulty and is not allowing the machine to boot, it'll only boot with one stick installed in the slot closest to the back case. What can I do to make both work? Or is one 8Gb stick a good option, will it perform as if there were two 4Gb sticks (Im worried that if one slot has went bad that the other will too.)? I'm very upset that a virtually new logic board is having this issue and that apple refuses to work on it because it is "too old".

Replacing the logic board is a way to costly option, so not really an option.

Ive tried loosening the logic board screws, as some have said that that has helped the slot read the ram, nothing.

Has anyone else encountered this issue? What did you do. What do you recommend? 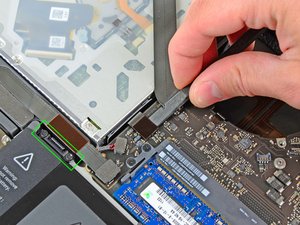 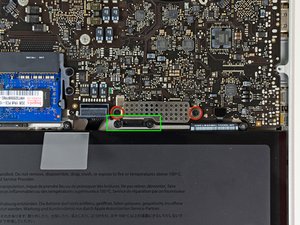 One or both maybe broken, if they are you'll need to find a replacement to prevent the bottom cover from crushing the RAM slot. You may also need to check the cover its self to make sure it's not dented or bowed inwards.

As for fixing the upper RAM slot its self, not much you can do here. You could try loosening the bracket screws (2 on each side) a bit, a 1/4 turn should do it. See if the de-stressing the bracket allows the contacts to grasp the module.

If that that fails then your idea of using a 8 GB module in the lower slot alone will work too! Your system can support unto 16 GB using two 8 GB modules.

Both are in good shape along with the bottom cover. I did also try the Ram bracket screws as well with no luck. This is not looking good for me .... What are your thoughts on just running an 8 Gb module in the one slot? Thanks.

It's your only option to get more than 4 GB. I don't see this as a problem in its self.

But, you may encounter issues later on if the carrier is breaking down.

I have the exact same issue with the same model. I was a solder technician in the Navy for many years and did some trouble shooting. When I put pressure on the ram stick and started the machine, it would not beep. Looking further, it seemed the ram slot pins were not sticking out far enough anymore. I decided to solder my stick of RAM on each pad for the connection to help them “make a connection".

Long story short, it didn't end up working. The soldered RAM still works and I just use that 8GB stick in the working slot.

Selling the laptop as is, or I may try to install a new ram slot if I can find the part. Adding to old thread