I need some expert advice on how to proceed on this one. A customer came in and wanted me to replace the upper case on a 17” MacBook Pro because of some water damage. I looked up the prices on line both on IFixit and Powerbook medic in front of him,

He does not like my prices and leaves. He returns about a week later with a part he has purchased from PowerBook Medic:

it is new and was a higher price than what I quoted, I do get a very small, about 5% price break since I am a reseller.

I am given one day to do the job. The customer returns the next day just as I am screwing in the bottom case. I hit the start button and it starts up. He takes the machine and leaves.

A couple of days later he returns and states the machine is shutting down on him unexpectedly and sometimes won’t start and implies that it never had this problem before, it worked fine with an external keyboard and it’s my faulty installation that caused the problem and wants me to fix it.

He also brings with him a new 500GB SSD drive and RAM upgrade for me to install.

I pull the hard drive, format the SSD externally on a faster machine and dupe it.

After duping I run Symantec anti-virus and find 205 viruses including:

After cleaning both the old and new drives of viruses I try both in his machine. It continues to exhibit the same behavior of either not starting or starting up to a white screen and then shutting down on its own. When it’s cold it will boot normally, as it did this morning. Ran fine and I downloaded a system update to 10.10.5 on his old virus free drive. After being on for 30 minutes it shut down on it’s own. Trying to restart I get a flash of LED on the front, sometimes a small click but nothing else with both old and new drives. In the expert opinions of the top professionals here, what do you think the problem may be? Is there any possibility or omission I may have made in my uppercase replacement that may cause this erratic behavior? I cannot run AHT because it will not stay on long enough. I know what I think it is but would appreciate inputs from the top techs in the world.

On the replacement part, the original top case came out of Saudi Arabia, the keyboard is slightly different, refer to photo. Suggestions on how to proceed would be appreciated! 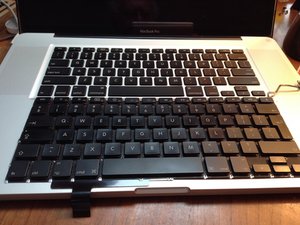 I would start by asking how many water tags were turned? Even if there is a single one turned I personally reject the machine as over time the corrosion can migrate and stop a motherboard in her tracks. The machine was working as you did your work and virus protection tests. That heated up the machine and could have caused the traces that were corroding to fail.

The only thing I would do at this point is pull the replacement drive and put a known good one in and test to see how it runs. If it ran right and you could load an appropriate system and updates without further problems, I would add the extra time to the bill as well as the drive cost and wish them a wonderful day. The only thing I warranty is the drive I put in that they bought from me and the time for it. Nothing else as I have no idea where the parts came from and I didn't make a dime to offset any time I may have to invest in the future.

I don't know why one would allow a client to bring their own parts to a repair as we develop relationships with our own venders of trust. I also never let a client watch me work on their machine as it tends to only have a negative outcome from their perception. Liquid spills are like a rabid dog. You never know when they will strike.

Good luck but don't be bullied into something you will regret down the road.

Yes I know you know everything I wrote but it is just a friendly reminder that you most likely did everything physically right but stuff happens outside of our control especially on spills.

Both the old hard drive and new SSD run fine when in another MacBook Pro after the viruses were removed.

Put on external USB port to check SATA connection of machine and if it boots and shuts down through USB , call it a day and look at replace or repair of motherboard. Good luck

Thanks for you input mactech. I actually made the call on this within ten minutes but my customer was insistent that it was my fault. It's like being told by the Doctor that you have cancer. Some people go into denial and want to blame the doctor. Thanks for your second opinion.

I had already told my customer that it needs to go to a specialist like Louis Rossman..

First thing's first is never do what someone asks you to. They spilled something on it, first thing they need to know is that it can die at ANY TIME. People never wish to live with the consequences of their diagnosis being wrong.

Find a way to measure voltage on C9560 with the laptop on. Does it ever drop below 1.8v?

My answer gets auto flagged as spam before it even shows up. I guess you guys can figure it out on your own. Hint, 820-2330 missing PM_SLP_S4_L video has similar problem to this.

I sent it you but it's coming back un-repaired. I would have appreciated a more detailed explanation after 5 weeks in your shop.