What is this wire running to the memory modules?

I'm trying to find out what that wire connected to the top right corner of the memory clips would be doing, and what the component marked 330 is that it's running to.

I don't see the wire in the pictures in the repair guide and I don't see it on two other Macbook Pro 13" 2012s that I have with me. 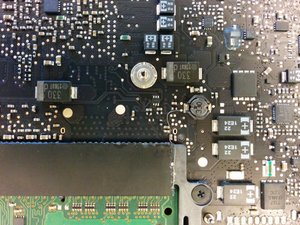 It's clearly a trace patch. But, from what to what? It looks like its on one of the solder pads of the transformer and loops up to the memory module connector where it appears not connected to anything, seems odd ...

Does it connect to a component on the other side?

Please give us a history of the machine

It's running from the inductor for the PP3V42_G3H power supply to the RAM slot. The inductor is part of the DC to DC voltage step down circuit that turns the 18.5v of the charger, or the 12.6v of the battery into 3.42v for the PP3V42_G3H rail, which is used for the onewire circuit and a bunch of other small bits and pieces of the laptop. The inductor stores power used for the rail before it is smoothed into a nice, even 3.42v by the capacitors in front of it.

Since PP3V42_G3H is not a power rail used on RAM, it was probably run by an idiot that thinks he can fix motherboards. Does it end at that plastic piece on the RAM slot? Is anything wrong with this motherboard? Was it previously spill damaged?

It had actually been spill damaged in the past and was sent away to an authorized repair place to be fixed up. I popped the bottom case off to take a look because of RAM issues (3 beeps) and noticed this. It must be from when they (tried) to fix it. As far as I can tell, it does end right on the plastic piece on the RAM slot.

Yeah then you have a classic case of idiot trying to fix a board. :-( This is prevalent across most fields, where people call themselves professional and take on work without the knowledge to do it right! There is NO REASON to leave unconnected trace wire there. Good chance PP3V42_G3H got sent to a memory controller or a RAM stick on a data line where it didn't belong as a result of this idiocy and now it is trash. :(

Remove the wire, and try different RAM in different slots. A common issue on these machines is one RAM slot dies. The top RAM slot is soldered using through hole soldering, which is durable. The bottom RAM slot is soldered using BGA soldering, which is junk, so there is a very good chance that using a good RAM stick in the top slot only will stop the beeping. Hopefully it is an issue of a RAM slot or RAM stick and not a controller being killed as a result of idiot board repair!

Keep us updated on what you find.

The circle looks like a solenoid and the others are certainly capacitors. Most of the times, the solenoid charges the capacitors.

What the capacitors do specifically? I honestly don't know