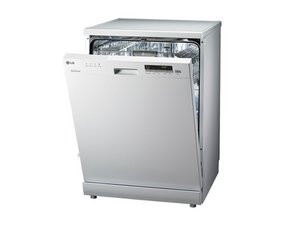 Repair and disassembly guides and support for dish washing appliances.

Dishwasher is draining slowly , and not completely draining

I have a kenmore dishwasher (about three years old) ! I first noticed water at the bottom of the tub when the cycle was over! I thought it might be a clogged drain line, air gap! I took every thing apart and cleaned out both! Still no luck, so I ordered a drain pump and replaced that ! And I am still getting water in the tub ! I noticed it is draining , but very slowly ! Any help would be appreciated

If the dishwasher won't drain, the drain pump might be defective. Test the pump motor with an Ohm meter. Drain pumps are not repairable, if it's defective it will need to be replaced.

The drain valve can get clogged with debris and should be cleaned out if the dishwasher won't drain. If it seems clear of debris but won't actuate, it will need to be replaced. The drain valve is not repairable.

Other Causes and Conditions

Those are the main things to check. You might find some additional ideas on the Dishwasher Not Draining page. Good luck!

I have checked all these items on this list. drain pipe clean, no check value issues, pump has continuity and runs, it just empties at a trickle in the disposal when it used to empty forcefully. Is it possible that a drain pump could run at a slow RPM if it is on its way out? Hate to buy a replacement with a solid answer to that question. -- Thanks!

Sounds like you still have an unfound blockage somewhere in the system, keep looking.

I recently replaced the selenoid and when I turn the dishwasher back up right the check ball released and found a flat washer at the bottom of the dishwasher??? Where did this washer come from ???

Thank you so much for posting this. Our dishwasher wasn't draining and we had just installed a new disposal. We didn't even know about the plug! Once we removed it, the water drained again. You are amazing!

I have also checked the "normal" causes. Still the washer does not always drain. However if I press the "cancel/Drain" button it does always drain so that proves the pump works and the hose and valve are not blocked.

If your drain hose is connected to the disposal, be sure the port inside the disposal is cleared.

This was my issue (food and debris clogged up into the port on the side of the disposal that drains from my dishwasher). Easiest way to clear it was from the air gap port on top of the sink, taking direction from this super helpful video: https://www.youtube.com/watch?v=rmG2JXQL...