MacBook - No signs of life

I opened up my White MacBook Core 2 Duo 2.4ghz to replace the optical drive and after I put it back together it would not power up at all. Absolutely no signs of life. No chime, no fans, nothing. The little white light on the front doesn't even light up. I opened it back up, took out the optical drive entirely and tried again - still nothing. I tried all the apple keyboard shortcuts - nothing. I have tried with battery, without, plugged in, only battery, nothing works. The battery is fully charged, MagSafe connector is green, then quickly switches to amber/orange when I plug it in.

I was very careful when I replaced the drive. I even used the anti-static mat. I've fixed a bunch of iPhones, iPads before I'm new to laptops but not totally clueless :(

Thanks for the suggestions. I was able to boot the computer using the power pads but the screen is black after that. No display. I hear the startup chime but then nothing. I've tried booting with the minimum plugged in - no optical drive no HD only 1 stick of ram to try to isolate the issue but thing helps. Is there anything else I can try?

Reconnect the keyboard to logic board connector. Sounds like your machine is not getting the signal to try to start.

Your update sounds like the nVidia 8600 issue. Please give us the last three figures of your serial number (located in the battery compartment).

Try to boot with the power pads 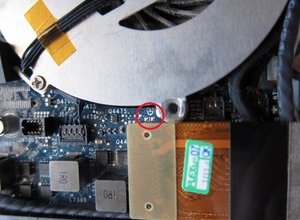