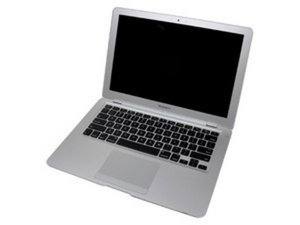 The MacBook Air is Apple's thinnest and most minimalistic notebook to date. Troubleshooting is fairly straightforward, due to the few number of parts.

Your computer will not boot.

If your computer beeps three times, there is a RAM issue. Unfortunately, the RAM is soldered onto the logic board. Therefore, the logic board must be replaced.

If your power adapter is bad, the computer will run off a battery, but it won't charge. The MacBook Air uses a special adapter with an angled connector. If your battery's charge is too low, it will be difficult to diagnose a bad power adapter. The easiest way to test this is to borrow either a battery or power adapter to test in your machine. If you have the same problem with a fully charged battery, you most likely need a new logic board.

If the fans run at high RPMs, but the computer does not boot, there is probably an issue with the thermal sensors.

If the above steps don't fix your problem, replace the logic board. We carry logic boards for the Original, Late 2008, and Mid 2009 models.

Also, 9 beeps on startup indicates a logic board problem. Try contacting your nearest Apple representative to determine if they will fix this problem (be sure to back up your data first!). If not, you must replace the logic board yourself.

Laptop shuts off when I unplug it

As soon as you unplug the computer from a power source, it shuts off

If your battery is dead, the computer will run fine off the power adapter, but will turn off when unplugged. A dead battery can manifest itself in many forms: It may not accept a charge (this particular symptom may also indicate a problem with the logic board), the computer may not recognize the battery, or the battery may be recognized as charged but fail to power your computer when the AC adapter is unplugged. Although Apple claims the battery is non user-replaceable, we show you how!

We offer replacement batteries for Original/Late 2008 and Mid 2009 models.

The computer displays the flashing question mark when it can't find a bootable operating system. This could be because your OS is corrupt, the computer doesn't have enough RAM, or your hard drive is failing.

Try booting off an OS CD. Run Apple's Disk Utility and try to repair the disk. If this fails, reinstall your operating system. If you can, erase the hard drive prior to reinstalling the OS.

This is quite rare. If you have insufficient RAM for your computer to boot the operating system, you may get the flashing question mark. Installing more RAM or downgrading to an older operating system will fix this. OS X 10.5 requires 512 MB RAM, and OS X 10.6 requires 1 GB RAM.

The hard drive may have been erased, corrupted, or damaged. If the hard drive has been erased, format it as HFS+ and reinstall your operating system back onto it. If it is corrupted or damaged, you need to replace it. Failing hard drives can display intermittent data corruption prior to failing completely. They often gradually get louder and start to click. If your hard drive is making abnormal clicking noises but still works, back up your data immediately and replace the hard drive. The Original version of MacBook Air has a different hard drive connector than the Late 2008 and Mid 2009, so be sure to select the right drive for your machine.

My machine boots, but the display remains dark

Symptoms of this are a dark screen, but everything else seems to be running.

If your screen isn't working, the display is most likely to blame. You must then install a replacement display. If this still doesn't solve your problem, you need a new logic board.

Your Bluetooth or AirPort has disappeared

There are a variety of symptoms:

If you're lucky, the fix could be very easy: sometimes the connector cable to the wireless board comes loose.

If you lose USB or audio port functionality, these ports are fortunately a separate part from the logic board. First, replace the port hatch assembly (Original or Late 2008/Mid 2009). If you lose the use of another component of your computer, such as the display, battery, or even power, and replacing the apparently non-working part didn't fix the problem, it is possible that the logic board may need to be replaced (see above).

If you seek replies to your comments go to Answers!

macbook air wont open its stuck on loading on guest user. Doesnt matter if i press cancel or try turn it off. Just comes back to the same

Please post this as a Question - you'll get more/faster replies than posting here in the tip/troubleshooting guide.

My macbook air won't turn on and continuously displays a flashing question mark.

How do I fix th problem