We’ve been fighting for the Right to Repair for years now, and we had a particular stride heading into 2020. At least 22 state legislatures considered bills that would let people fix their own stuff. Polls showed the repair movement had overwhelming, bi-partisan popular support. What could go wrong?

So, that happened. But even in a year where statehouses were closed and everyone’s attention was divided, the movement to let people fix their stuff made serious progress. Let’s look at the five biggest wins for Right to Repair in 2020.

We Learn From Emails That Apple Is Conflicted About Repair

First up, we have some problematic emails, though not the ones you’re probably thinking about. We’re talking about emails sent around inside Apple, after iFixit asked the company if they really meant to post a full, beautiful 2019 iMac repair manual PDF online, breaking with their usual policy. This caused an Apple executive to ask, “What is our repair strategy?” If only we’d known before that we could just ask the world’s most valuable public company that question!

Along with our question about a single PDF, Apple did some further soul searching after a New York Times op-ed joined the call for a universal right to repair. We know about these emails because of a Congressional inquiry into whether Apple and other tech companies held too much power, and the resulting release of documents. It’s reassuring to know that, despite the official wall of silence, there are groups of motivated people inside some of the biggest players in the game, asking why things can’t be easier to fix.

For our next win, we leave Cupertino and head to France. Starting in 2021, every smartphone, notebook, TV, washing machine, and electric lawn mower sold in that country will have a repairability score. It’s part of a broader European move toward demanding more durable, repairable products for its citizens. And, in a nice surprise, the ratings are easy to understand, even if you’ve never taken apart a phone.

France grades products based on:

And a few other points. It’s a bold move to end planned obsolescence, and a big win for giving people more control over big purchases.

Hospitals were overwhelmed when COVID-19 first swept across the country. During the initial outbreak, there was not only concern that there weren’t enough ventilators, but that ventilators and other critical equipment could not be quickly repaired when they broke down. The reasons why are many, but chief among them is a byzantine medical repair and service economy. Many medical manufacturers don’t make their repair manuals public, preferring their lucrative licensing and maintenance contracts.

We like free repair manuals at iFixit. So much so that about half our staff spent two months’ time making a huge, open repair manual database. We launched it in late May with more than 13,000 manuals, and it’s open for anyone to add to. iFixit doesn’t make any money on this project, but we wanted biomedical repair technicians, or “biomeds,” to not have to waste time in a crisis looking for repair guides.

For our fourth win, we head back to Europe, where, in late November, the legislators of the EU voted overwhelmingly in favor of moving the whole continent toward fair repair, including the kind of repair labeling that France is going to enact in January.

Nothing will change just yet, but with 395 legislators voting in favor against 94 opposed, it’s a sign that our EU work is bearing fruit. Europe aims to make companies own up to how easy or not their products are to fix. And if companies have to design their products to get a better label rating, well, that’s great for us all.

Okay, one more trans-continental journey, back to the Eastern seaboard, for our big number one win for the year.

“Question 1,” or the “Right to Repair Law,” was approved by just under 75 percent of voters in November, despite heavy (and heavy-handed) corporate opposition. The law demands that car makers provide a way for car repair shops, and car owners, can access the data their cars send wirelessly to the manufacturer. This prevents manufacturers and dealerships from having exclusive access to data that could be helpful in fixing your car.

That’s great news on its own, but it’s even more exciting for what it means beyond just one state. See, Massachusetts is where the first automotive right to repair law was passed in 2012. That law made car makers open up the data inside the car. Rather than create a solution state by state, and seeing the writing on the wall, car manufacturers instead reached a nationwide agreement with car parts makers and repair shops on how to share the data.

That agreement gave us the OBD-II port that’s in almost every U.S. car or truck made after 1996. With this new Right to Repair bill, we could see car makers take on a similar expansion of data access for all cars. At the least, it could inspire other states to demand similar rights—and, hey, maybe even for devices other than cars!

Those are the five big wins we saw for our freedom to fix in 2020. There’s a lot more work ahead in 2021, and you can help. You can help out by checking out Repair.org, where it’s easy to catch up on your state’s repair legislation and contact your representatives. And, as always, stay tuned to iFixit on the web, social channels (Twitter, Facebook, and Instagram), and YouTube for more right to repair news. 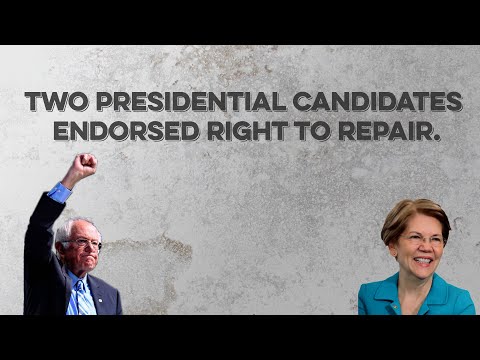