Tuesday night was momentous for the technology industry in more ways than most readers may realize.

With 74.8% of Massachusetts voters approving, “Question 1” or the “Right to Repair Law” Vehicle Data Access Requirement Initiative, passed on Tuesday. It demands that carmakers allow owners and repair shops to access their own cars’ repair data, starting with model year 2022.

Kyle Wiens, iFixit CEO, is thrilled. “Modern cars can send maintenance information directly to the manufacturers, cutting out local mechanics. Question 1 makes sure that consumers can continue to fix their own vehicles, or get them fixed at the shop of their choice.”

That means that independent repair shops will have a level playing field with car makers and dealerships, which have turned increasingly to locked-down wirelessly collected repair data, or telematics. Car owners, too, will be able to see their cars’ maintenance information through a smartphone app. And it opens the door for innovations, like wireless diagnostic apps for iOS and Android.

While the results are not final and official, 37.05% of counties are reporting in and a positive outcome seems certain.

“In voting to approve ballot Question 1, Massachusetts voters have once again chosen facts over FUD—fear, uncertainty and doubt. The beneficiaries are vehicle owners, who will continue to enjoy the same access to the critical repair and maintenance data as automotive dealers use to repair and service their own vehicles,” said Paul Roberts, head of the security group Securepairs.org. “Small businesses across the Bay State will also benefit: competing on an even playing field with dealerships and their authorized repair providers and providing vital competition for aftermarket service and repair.”

iFixit supports Massachusetts car owners and repair workers in their fight to fix modern vehicles. The passing of Question 1 is a milestone for the Right to Repair movement, which aims to provide similar access to the tools needed to fix electronics, appliances, and other devices.

“Whenever voters are asked if they want more control over repair, or if they trust manufacturers—it’s not even close, and you get a clear indication of why Right to Repair is a growing phenomenon. This vote is yet another example that proves Right to Repair is a winning idea. It’s time to let people fix their stuff,” proclaimed Nathan Proctor of USPIRG.

While Massachusetts is the first state to see its cars open up their data, it likely won’t be the last. The commonwealth was the birthplace of the last major car data initiative. In 2012, voters overwhelmingly approved that year’s “Question 1,” directing car makers to grant repair shops and car owners access to their own cars’ data. Rather than negotiate state by state, car makers implemented the data access standard nationwide via the OBD-II port. In short: car makers couldn’t force you to return to the dealership for every “Check Engine” light.

This could, in other words, be the start of another nationwide push toward open car data. It could also lead to broader electronics Right to Repair legislation, championed by Repair.org and introduced in over 20 US states in 2020.

As detailed in Lauren Goode’s recent WIRED feature on Question 1, there is still work to be done in defining the scope and practical application of the automotive initiative. But Tuesday’s victory shows that people overwhelmingly support fair repair and reject baseless security and privacy “concerns.” And they want people they trust to fix the things they own.

We’ll give Corynne McSherry of the Electronic Frontier Foundation the last word. “Right to Repair is the simple proposition that if you bought it, you own it, and that includes the right to fix it yourself or take it to the repair shop you choose. Manufacturers want to keep consumers tied to them long after the sale is done, and they are not afraid to use false security and privacy claims to scare consumers into agreeing.”

“We’re glad voters saw through it, and those tactics didn’t work this time.” 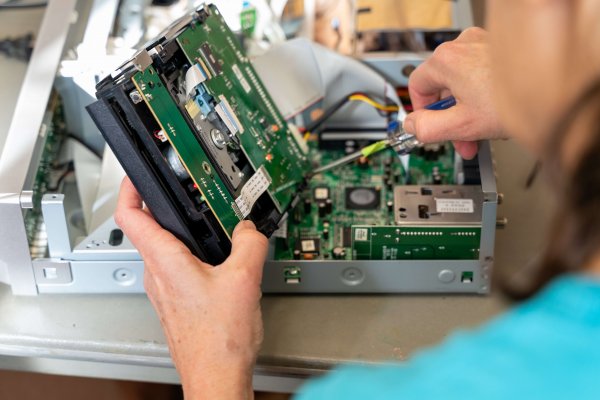 Right to Repair is Happening in Massachusetts Right Now. We Need Your Help.

I want to support this. How can i help?

Great! Love to hear more updates on this. I'm hoping that this will also happen for consumer electronics and telecommunication devices.

In all honesty this bill isn't really about right to repair. I would have rather banned manufacturers from being able to gather your telematics data to begin with. This data isn't all that useful to us dyi people. It is, however, very interesting to businesses who want to know your driving habits and overbearing authorities who could use the info to prosecute you.

I just wish the bill made a priority of protecting our data on top of allowing us access to it. We should be able to choose who gets access the the cars data, not the manufacture nor the state.