We, the tossing-out public, share some of the blame for these disasters. But so do many manufacturers, who give us no way to safely remove batteries, or no solution for replacing or recycling them, or both. Too many areas of the country lack for a battery recycler within reasonable range. It all adds up to a whole bunch of little time bombs, waiting to get crushed and, inevitably, explode. Because they do explode when crushed, and cause fires in garbage trucks, as demonstrated by Mythbusters Jr.


This needs fixing. If we don’t do something to make batteries easier to remove, and create a plan for their afterlife, more catastrophic fires are inevitable. All it takes is someone’s old razor, a pair of wireless earbuds, or a device with an embedded battery someone didn’t even know about. Some states and agencies are already moving on it, but everyone needs to know about what batteries can do, and where they belong.

Why are misplaced batteries so dangerous? Because waste management is a brute force business. Apply random, violent force to a battery someone threw in the garbage and the result is almost always ignition.

Trucks and compactors squeeze trash with forces up to 1,800 PSI, the equivalent force of water on a submarine 4,000 feet below the surface. When a battery is damaged by that crushing, it’s highly likely the thin separator between the positively charged cathode and negatively charged anode will be breached. This short-circuit starts a thermal cascade: the battery gets hot, more of the separator erodes, leading to more heat eroding the next layer, in a cycle. Eventually the pressure and heat pop open the battery. When the lithium electrolyte inside the battery is exposed to air, it catches fire. A very fast fire is also called an explosion.

Batteries can also cause fires without internal rupturing. The terminals of a battery can touch metallic objects like the sides of a truck or container and close a circuit, causing sparks and heating up the battery. If that spark causes a fire, the fire can spread throughout the container and eventually cause the battery itself to explode, along with any other batteries nearby.

Lithium-ion fires are a particularly insidious kind of fire. The runaway reaction that causes them can keep occurring inside the damaged battery. You can watch workers at an EcoMaine facility extinguish an exploded battery more than a half-dozen times, even after pulling it out of a pile with a front-end loader, to no avail. The fire keeps re-igniting, and all anyone can do is give it space and wait for it to die down. If it’s deep inside a waste pile, disaster is almost unavoidable.

Everyone who works in batteries, or trash, knows these things happen, but we’re overrun with lithium-ion. 175 million pounds of these batteries were sold in the U.S. in 2017 alone. Some of those batteries—the ones people know about and can access—are labeled with “No-can” or recycling symbols that leave people confused.

USA Today reports that 65 percent of fires at waste facilities in California were started by lithium-ion batteries. In a 2018 survey of 21 waste facilities across California, 86 percent reported a fire at their facility in the last two years, according to the California Products Stewardship Council (CPSC). Of those fires, 56 percent were attributed to batteries, with the remainder attributed to “traditional hazards of combustibles.” In other words, batteries are causing more fires than the oils, fuels, and other hazardous materials of waste management—combined.

And that’s only the fires actually reported.

“One thing we have been seeing more and more, especially on the private sector side, is an apprehension to publicly admitting [or] acknowledging fires at facilities,” said Doug Kobold, executive director of CPSC. “This is out of fear that they facility may lose its insurance due to the growing risk.”

Privately, managers at two waste management and recycling companies told us that lithium-ion batteries were the primary source of fires—in collection trucks, and while workers are handling and sorting waste. It’s not just equipment and piles of waste in danger, it’s people. As written by Morieo Melton, who posted his own truck’s battery fire to YouTube:

“Please don’t throw away batteries people. Us garbage men have families that love us and would like us to be here.”

Recyclers are Under Siege

In 2016, at the Shoreway Environmental Center in San Carlos, California, a battery moving through a shredder sparked a four-alarm fire that roared for hours and caused $8.5 million in damages. You can watch this battery spark the fire looking right into the shredder, or from a slight remove. As with most any waste fire, you’ll notice the fire is fueled by the literal tons of flammable material nearby.


After this fire, the company that runs the facility, South Bayside Waste Management Authority (SBWMA), had its insurance cancelled. It took seven different insurance policies to provide adequate coverage and spread the risk around, at a dramatically higher price, Kobold said.

No article about batteries would be complete without mentioning some vaporware amazing new battery technology that will solve all our problems. There are alternative battery technologies in research stages now, with solvents that don’t catch fire in oxygen, and solid-state batteries less likely to experience thermal runaway. But experts warn that new mainstream battery technology isn’t coming anytime soon. In the meantime, more and more regular, pressure-prone lithium-ion batteries are issued into the world each year.

What should you do with your own batteries? Use the recycling finders on Earth 911 or Call2Recycle to find drop-off locations for your batteries, and check with your municipality to see if they offer recycling or drop-off events. Don’t throw your batteries in the trash or recycling bin unless you really don’t like your garbageman. And start buying devices that have batteries that are easy to access and remove, unlike, say, those smooth white headphones that Apple is peddling.

Batteries Explode—Stop Gluing Them Down 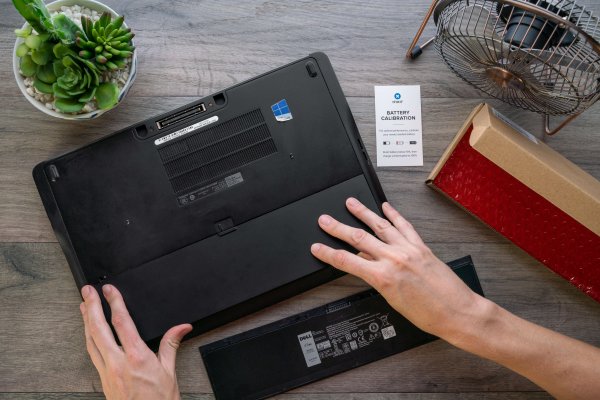 Make Your Laptop New Again with Our PC Batteries

I worked at an IT repair business. We had a special barrel filled with some sort of grain in which we tossed old phone and laptop batteries. The grain was poured on top of every layer of 4 to 5 batteries. We had to tape the contacts of the batteries to prevent them from making contact anyway. When the barrel was starting to fill up, we could call a company which then send a truck to pick up the barrel and bring back an empty one with that grain. I forgot what the grain was called, but I remember the driver telling me it was specifically in the barrel to prevent the batteries from combusting forever.