Kikuyu farmers would be in serious trouble when their water pumps broke down were it not for Simon Njugi. This post was originally published in The Atlantic on November 9, 2011. Brian X. Chen and Kyle Wiens contributed to this story.

Soon after we arrived in Nairobi, Kenya, we headed into the country to get a feel for the hardware used by rural farming communities. All the villages on the outskirts of the city are dependent on wells for agriculture most of the year. 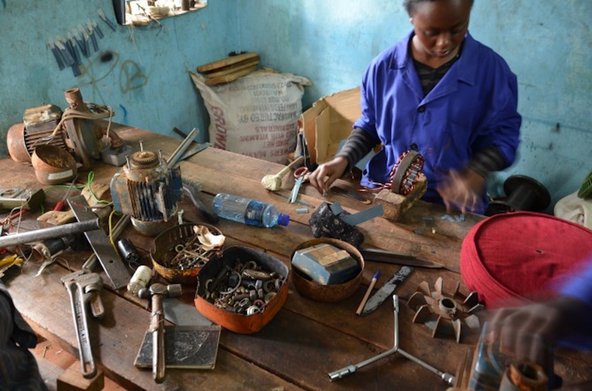 Kikuyu is a moderate-sized town of just a few thousand people on the outskirts of Nairobi, but it’s the hub of a densely populated agricultural area. The businesses here service around 600,000 people in the surrounding areas. The countryside is lush, with rolling hills, and tea bushes nestled under verdant green trees.

Considering the size of the surrounding area, this village is quite small. Nestled in the middle of farm country, the services its businesses provide are essential. The most important shop of all is the water-pump repair shop. In a farm town as small as Kikuyu, you’re in serious trouble if the motor on your water pump breaks down: crops wither and die quickly in the sweltering heat. New motors are expensive, and out of the price range of subsistence farmers.

The man who keeps the pumps pumping and the water flowing is Simon Njugi, a small man who looks a tad younger than his 38 years. He is Kikuyu’s water-pump repairman, and therefore a popular guy. His workshop is housed in a large concrete building in the center of the village. When we arrived at the workshop, Simon strolled out to greet us.

Simon learned to repair motors from his father, Ndua, who worked repairing motors for someone else for over 30 years. Slogging it out for years on end, Ndua had always wanted to run his own business, but had never been able to take the risk at the same time he was providing for his family.

Simon grew up watching his father repair motors, and had always wanted to strike a more independent path. After graduating high school, he saved up some money from working odd jobs and started his own shop. Demand for his services grew quickly, and soon he was able to hire his father. They finally had the family business they’d both always wanted.

Both Simon and Ndua know exactly what they are doing–their hands are gnarled from years of winding copper. They learned their trade the hard way, from making mistakes, teaching each other as they went. Simon is better with newer pumps with more electronics, and his father specializes in older models and their whimsies.

Usually, when pumps fail, power spikes or overloading fries the insulation coating the copper coils inside the motor. The fix is to replace all the copper with new windings. This is time-consuming, but relatively straightforward, as long as you precisely replicate the old winding pattern.

Motors are almost never fixed this way in developed countries, because people toss the motors and replace them with a new model. We mentioned this to Simon, who thinks we’re crazy for throwing away perfectly good hardware. He spent some time enthusiastically explaining to us why older motors are more rugged and more reliable than motors being manufactured today. Then he invited us inside.

Inside the shop, motors were stacked everywhere. He told us that villagers regularly bring in broken motors, but often don’t have the money to pay for the repair. So while he fixes the motors, the villagers scrounge for the money, usually borrowing from friends and family. If they can’t afford the repair, he hangs on to the motors for a three-month grace period. On the back wall of his shop, dozens of repaired motors await their owners to claim them.

But Simon isn’t satisfied just fixing things himself: He’s most happy when teaching people how to fix things. He always has a couple students working with him, and he takes pride in teaching and passing along his trade.

He introduced us to Kioni, a young woman apprenticing in the workshop to learn motor repair. Simon says that it takes several months of hands-on training to learn to rewind motors well. Kenya’s repair people are more heterogeneous than we found in Cairo, and she was the first woman we’ve seen fixing anything on our trip. She was clearly excited about her new trade, and proudly shows off the motor she’s repairing. Her posture brims with self-confidence.

Simon’s workshop has seen tens of thousands of motors pass through its walls. Kim has brought his motor to Simon three times for repair, and each time returned it to heavy use. They come in as broken lumps of metal, with internals twisted into a blackened mass of metal. They leave good as new, with a fresh coat of paint, glistening rebuilt copper internals, and a smile on Simon’s face as he hands it back to its owner. Just as an electric motors is the lifeblood of any farm, Simon’s workshop is the cornerstone of this community.