We’re no stranger to MacBook keyboard issues. Since 2015, Apple’s new super thin MacBook keyboards can be rendered catatonic with just a fleck of dust. And as Joanna Stern cleverly writes in a column for the Wall Street Journal, Apple’s recent improvements don’t seem to have helped, as her oft-used E and R keys are inoperable.

The column overviews a problem that we know all too well: the thinner keyboards on newer MacBooks use “butterfly” switches instead of the tried-and-true scissor mechanism used on previous MacBooks. This new tech allows Apple to make its laptops even thinner, but dust and other particles can make their way under the keys and jam the switches underneath the keycaps.

But despite numerous “improvements” from Apple, the problem is still alive and well. Here’s the state of things in 2019.

The Butterfly Keyboard: Not As Majestic As a Real Butterfly

Apple introduced its butterfly keyboard in the 2015 12-inch MacBook as a way to make the keyboard thinner than ever before, but the new design has introduced a lot of problems.

Like with any keyboard, dust and other particulate matter can make its way underneath and into the butterfly switch mechanisms under the keycaps. This can prevent the keycap from pressing down on the switch, or can disable the return mechanism. Unsurprisingly, keys that are used more often—like the E and R keys—are usually the first to go, likely because they’re some of the most-used letters in the English language. This implies another potential cause of the problem: the weak spring mechanism could also be wearing down quicker, resulting in stuck keys that take a while longer to spring back up.

On any other keyboard, you can remove the keys and blast out the dust with some compressed air, but Apple’s butterfly keyboard makes this simple job a nightmare: while most of the keys can be removed and blown out (as Apple recommends), sometimes it just doesn’t fix the problem. With the spacebar, it’s pretty much impossible to remove the keycap without destroying the entire key. Worse yet, the keyboard is attached to the laptop’s battery, trackpad, and speakers, so merely swapping out the keyboard on its own is impossible.

About a year and a half after Apple first introduced this new keyboard, they quietly made improvements to it beginning with the Late 2016 MacBook Pro: the keycaps are a bit taller, and the dome switch under the butterfly mechanism is heftier and better secured to the cap. Unfortunately, it didn’t really solve much.

So last year, Apple made even more improvements to the keyboard in the 2018 MacBook Pro, allowing the spacebar to easily be removed, as well as adding a rubber membrane into the butterfly mechanisms. Apple claims this improvement was made to quiet the keys, but let’s be real: it’s to keep dust out. Apple filed a patent for this very purpose in 2016, and on page 12 you’ll see the proof in bold letters in the very top-left corner of the document. The quieter keys are merely a nice side effect.

As for the membrane’s effectiveness in dust prevention, it works well up to a certain point, but it’s not completely foolproof, and Apple has still received complaints about it, as Stern points out in her column.

In any case, Apple ended up stuck between a rock and a hard place when a class-action lawsuit forced their hand into offering a free keyboard replacement program. This covers any MacBook that uses the first two iterations of the butterfly keyboard for up to four years after purchasing the laptop.

Still, there are millions of newer MacBooks out in the wild that don’t have this fancy new membrane. And while they’re covered under warranty for a cool four years, it doesn’t get rid of the headaches and inconveniences that owners have to deal with when things go wrong. It’s a clear design flaw that Apple has failed to fix, and they need to stop taking half measures and eliminate the butterfly mechanism in favor of something more reliable. 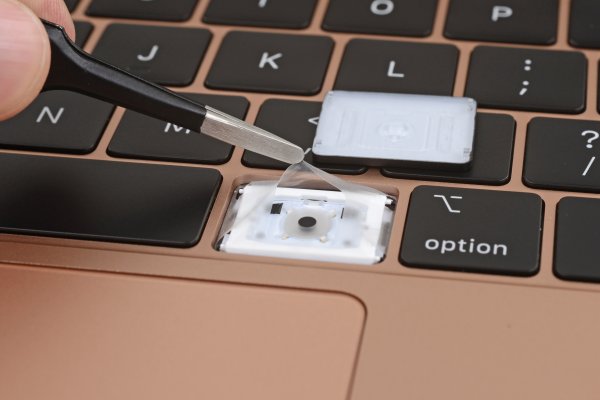 Well it looks like Apple has found its way out of the lepidopterarium ;-}

Apple is reportedly giving up on its controversial MacBook keyboard

I have an issue with left Command key on MBP 13” Retina. But the key is neither jammed nor anything… I mean, mechanically it feels just as any neighbour. Can it be software issue?