Written By: Sam Goldheart (and 9 other contributors) 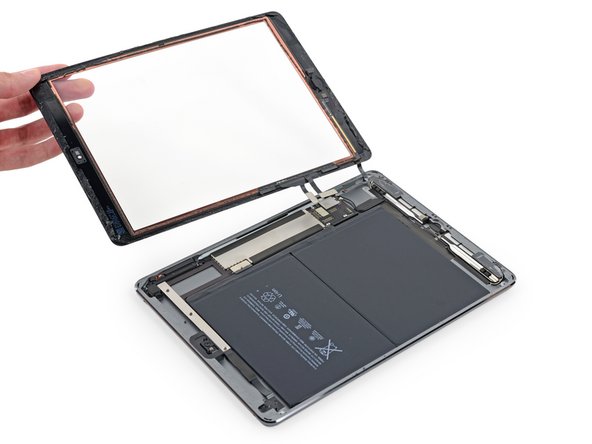 Use this guide to replace the front glass and digitizer assembly on an iPad Air.

538 other people completed this guide.

Actually, I didnt remove the crashed front panel(the old one) as this guide. The edge of front panel didnt stick so much with the cover case, so I use force to tear off the crumbled edge. Be prepared for the "dust of glass", it will really hurt your body, if you plan to do as my way.

Additionally, there is another difficulty part of me. When I stick the new panel on. There is always some small dust between the screen and the front panel.

Great guide, a lot harder with a cracked screen due to no flat surfaces for suction cup but eventually got it off, thanks

How to put it back? LCD + digitizer do not want to "cooperate" in ribbons area

Use the spudger to gently push or pull them into the slot. That's what I did. It's charging now so I don't know if it works yet or not

Assembled back with a new digitizer. Powered on.

1. Screen keeps to be black, no image. Put on a charger, iPad makes "boing" sound very quite every 10 seconds or so. Plugged it into a Macbook Air, iPad show up in iTunes and iFoto, all data can be accessed.

3. Now, input is very sporadic and unreliable. Device keeps selecting items on its own and starting apps on its own, doesn't react reliably to user input. Seems as if the digitizer or its connection is damaged. Hard to tell, everything went ok, only problem was the removal of the old adhesive to have a plain surface for the new one.

As is, this is a failure, device does not work as expected. Data is safe though.