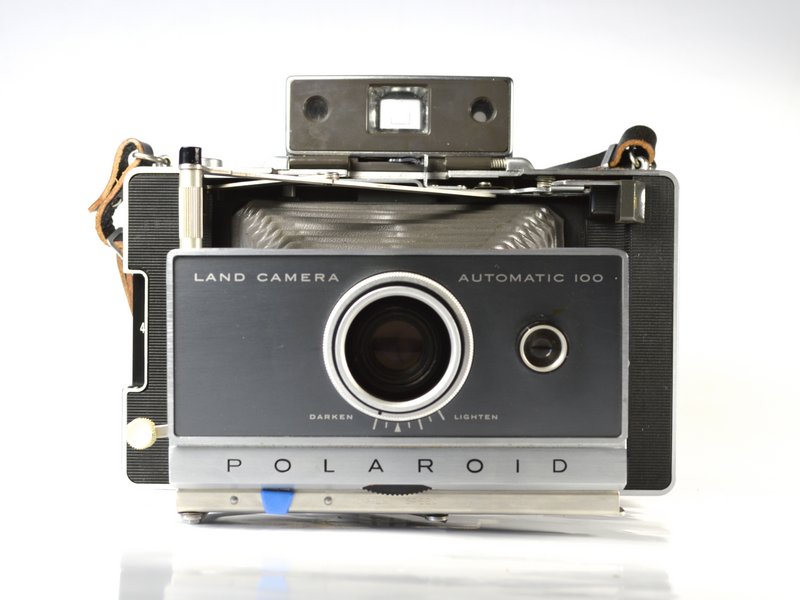 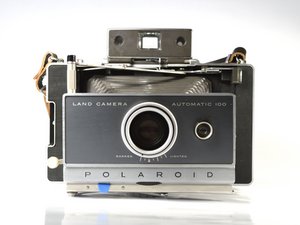 The Polaroid Automatic 100 Land Camera is the first of four generations of folding rangefinder Polaroid cameras. It features folding bellows and automatic exposure.

Author: Julia Iijima (and 3 other contributors)
Create a Guide
I Have This

Back Lens of the Viewfinder

For more information on troubleshooting the Polaroid Automatic 100, click here.

The Polaroid Automatic 100 was released in 1963 as the first mass produced Polaroid pack film camera. The camera originally retailed for $164.95 and approximately over one million Automatic 100’s were sold in the first four years of production.

The Automatic 100 has a hard plastic built in case to protect the 114mm f/8.8 3-element glass lens and expandable bellows. All of the folding cameras in this 100 series must be manually cocked and can be focused using the sliding arms by the top of the bellows. The Automatic 100 offers several film speeds, 75, 150, 300, and 3000 ASA, and has the most features of the 100 series. In addition, there is specialized feature to distinguish the scene, from indoor to outdoor settings.

The Automatic 100 looks similar to Polaroids of other series in terms of main components: the bellows fold, the magnetic viewfinder flips up, and the lens and small electric eye extend off the bellows. However, future models incorporate slight changes. The models following Model 104 replaces the glass lens with one made of plastic and incorporates an electric timer on the back. Furthermore, the Polaroid logo on the later models is colored instead of the plain silver featured on the Automatic 100.