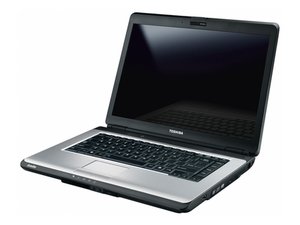 The Toshiba Satellite L300 was a notebook designed and sold by Toshiba that came with a version of Windows Vista force fed. They were sold around May-June 2009 and while ineligible for the free 7 upgrade,time past and upgrades are unclaimable now,run 7 home premium well without upgrades mainly because of Vista's resource hog quality

How to fix a notebook that freezes when plugged to AC power?

I have a Toshiba Satellite L300 which is 3 years old by now.

2 months ago it started to freeze or restart after some minutes connected to AC power, in battery it works nice, and it's able to recharge the battery when turned off. I took a long to identify that it was the AC power because it used to work for some minutes before shuts down. As the days go by the problem got worst and now it hangs at the same moment when I connect the energy.

I've read a lot about this problem and tried different solutions.

Tried another cable, cleaned the fan, monitored processor temperature, I've disabled one of the processors using BIOS, changed processors frequency to "always low" in BIOS, changed memory cards, removed the battery, pressed the on/off button for 30 seconds, removed hard disk and tried to use a live CD, I also have tried to configure laptop-tools (a linux tool to manage energy) but I don't know if I did it right, I was trying to set (in linux) the notebook to behave the same way in terms of energy with battery and AC power.

My readings indicates that's a common TOSHIBA problem and it's hardware. I send to 3 technicals assistance and they were unable to solve the problem. One of them told he changed the "BGA" chip (i don't know what it is), he said it worked for some time but later the problem appeared again (I don't believe it).

Some people say they can use it in Windows safe mode, but I don't have Windows installed. I'm running Ubuntu Linux and I definitely think it's not an OS problem since I tested with other OSs including Windows, actually I tried to install Windows but I was unable to finish since the battery autonomy is not enough (<1h) and in AC power it freezes anyway.

If anyone knows how to do it, tell me please. My battery now just hold 30 minutes and my notebook is almost useless by now.

Great solution. Thanks very much. Works also with Asus laptop.

THIS IS BECAUSE OF MOTHERBOARD PROBLEM, U NEED TO REPLACE CAPACITOR PACK WHICH IS AVILABLE BOTTOM OF MBD.

Toshiba's have had trouble with a NEC/TOKIN OE128 Proadlizer Capacitor. It is a SMD capacitor and therefore difficult to fix for the DIY'er. The habitual behaviour was that the temperature would go up whenever the AC adapter was plugged in, causing the capacitor to fail. It should be located by the CPU, close vicinity anyways.

amjad i hav tried as u said but still not working on my toshiba A200 satellite laptop......whether it works only for ac power or it works even when battery is connected.....or this trick works only when battery is removed but if battery is removed how laptop will start since my laptop when connected with charger hangs immediately it does not start i showed it to some repairing person he said some ic below the processor has to be replaced .....wht should i do.

May Allah Bless You with lots of joys and happiness

We should believe in this modern world people like amjad Exists and help others with their efficiency Thanks lot Amjad bro...!!

firs and simple thing to check is brightness settings on plug in, if brightness is 0 when power plugged in then screen may goes dark.

go to safe mode in windows ,, go to ,cantrol panel ... go to device manger and disable both processor 100% pc will ok

amjad,God or Allah,i don't know which religion u worship with,but what i know,God will bless u in plentiful fold.u are the best.i've had dis problem over a year now,and it really !@#$ me off.toshiba should look for a solution with their !@#$%^ up processor.i am buying a new note book next week,but no more toshiba !@#$.i am an engr myself,but i have not seen something like.people follow amjad instruction.it works for me.thank u very my good virsual friend.u can email me.(rupertoghene@yahoo.com).cheers

Thank God I run onto this! I have the same problem for about 2 weeks, tried disassembling the laptop to the bones but still the problem it persists! I Isolated every part of the laptop and the last culprit was the AC power adaptor, So maybe I had a bad ac adaptor? then I borrowed a friends power adaptor(toshiba also, same voltage rating) still I got the same problem!

But walla! after reading this! It's amazing how this piece of I thought was junk was brought back to life!

Asalam o alikum to all of you

who have not read the amjads instruction , they can read it here

Thank you very much Amjad, you solution works. My laptop does not hang anymore when my power cable is connected.

OMMMGGG I THINK I HAVE THE SOLUTION TO THIS!!!!!! WELL I HAVE HAD A PROBLEM WITH MY MSI GAMING COMPUTER FOR SOOO LONG!!! WHAT I DID WAS GO TO

-THEN GO TO BATTERY

after you do this you will see that the battery notification thing on the bottom right of the screen goes away... but it will still run and still charge your battery if you plug in your charger. HOPE THIS HELPS!

thanks a lot...above fix worked for me while also being the most convenient to do!

I only needed to disable the 'Microsoft AC Adapter', and it worked like a charm. Sounds like they may conflict with each other... who knows, but worked, so thank you very much!

It really helped...Thanks a ton...since 3 days I was banging my head for this & finally I got the solution by you...great yaa...

Just disabling the 'Microsoft AC adapter' worked for me as well! Thank you for posting this!!!! This has been driving me insane!

As an owner of this laptop, and as someone who does computer work for spare $$- it sounds as though the actual internal connection may have broken (where the power pin is inserted)...It's possible that the solder has broken/cracked & this may be causing a short. I'm only guessing (obviously)- but based on what you've said here, there's not much else...You did say you "replaced the cable"- but did you actually replace the entire power unit, or just the one cord? Places like the large electronics shops (Best Buy, etc) have generic chargers that run around $80US. Ask to verify it will power your unit- if it doesn't work- don't buy it.

Lastly, I bought a generic, new, replacement battery on ebay for $38.

When I say I replaced the cable it means I've used a different one and the problem persists.

ABCellars I didn't understand well the part os MOSFETs and BGAs but I'll send the notebook to someone with soldering skills to see if it works. Thank you guys.

To be honest Felipe, depending on who you get, it may cost more than the unit is worth. I see this laptop selling for around the $150-200 mark on ebay (which is way over-priced for specs compared to what you can get new right now for not much more $).

I also know that in order to open that particular laptop & reach that connection means quite a bit of time involved- so if your tech charges by the hour- it def won't be worth the money...You can keep the hard drive & drop it into an external 2.5" USB enclosure for cheap (& it's a 5 min. screwdriver job you can do yourself). That would give you an instant backup & then you can copy over the data you wish a duplicate of, afterwards, to a new laptop.

...One more thing- I just disassembled my L300 & the internal power is a self-contained, easily swapped out unit (at least as far as from the plug to the outside port)...I'd be happy to mail it to you if you want to try to open the laptop yourself & test it out?

Photos here as a zip file:

I recently bought a new laptop but I really didn't want to retire the old one since it is still a good machine and my children would love to have their own computer. That' why I'm looking forward to fix it.

I have already opened my L300 so it's not a problem to change this piece. Do you really think that replacing this component can solve my problem?

When you say you'll be happy to mail the component you really mean it? My mail is fsc7 at yahoo dot com . Let us talk about it. Thank u in advance.

please you do not need to change the mother board, all you need to do is go to control panel then power option then put it to high power or maximum then see how it behaves,

True i had the problem in campaq C40 tu616 with WIN7 and i changed the power to high and now when i remove the power cord it works normally and must watch what it happens in long run. I also had the problem of laptop becoming slow when i use MS word 2007 and need to check with that also.

Thanks even my asus laptop hang and I follow the instructions and it works thanks a lot.......>_<

Thanks it works for my Toshiba.

I had that problem (restarted when plugged in) I disabled both processors and for a time it was good, but after sometime the problem came back again, so I took the laptop to a repair shop told them what was the problem and that they needed to replace the NEC/TOKIN OE128 Proadlizer Capacitor, they did that, I paid 86 euros and the problem is gone. All is fine now.

My HP Probook hang, I reinstalled Windows many time but no success, if I remove AC Power it does not hang. I think bad AC Power mostly causes this hang. I will try new AC Adapter.

go to safe mode in windows ,, go to ,cantrol panel ... go to device manger and disable both processor 100% pc will ok saved a Toshiba Satellite A305 with Windows 7 64-bit from being thrown in the garbage.

I have no OS in laptop, I can't turn it on, because it turns off immediately. So this helps me not

Not too sure, but I'm thinking this refers to reducing the max performance the CPU will operate at?

I've read this in other places, as well. All I can think is that, at the 100% setting, the motherboard in question is overheating- or that the CPU is unable to sustain a 100% output (defective/overheating perhaps due to improper heatsink placement?).

So, by going into the performance/power settings, you're able to reduce the high-end of the CPU from 100% to whatever you'd like (say, 75%). It may slow the PC a bit, but it's better slower than "dead"?

how to do it in ubuntu

Your Laptop will definitely be OK . Just try this - In the search box write services and click. Go to power options in rigth hand side of the services box. In General category change start up type from AUTOMATIC to DISABLED. Click Apply - Ok. Restart your computer. Your problem is solved.

LOL. After I do that, computer power off insantly :)

The best method is to disable de both cores of processor !

I have 4 cores so should I disable all the 4 cores or only 2?