Mobo replaced, tv turns on, backlight, sound ok, but no image. (UP)

Hello there, i would like to ask for your kind help.

I’ve got an LG 42LB5610 HDTV which was not working properly, did nothing on power on button.

Now that i’ve replaced the motherboard the tv turns on ( standby light flashes two times, then goes black, if i turn of the tv, it goes back red) but you can’t see screen, nor sound.

I’ve checked voltages between the backlight led+ and ground it gives 250V when the tv on button is pressed, then goes down to 108V slowly. Standby mode voltage is 65V. ( encirled the connector on the picture )

I’ would like to know if it worth checking the backlight led strips, or it can be a power supply issue ?

I’would be very grateful because ive got this tv as a kind of present because everybody nows im that guy who can repair everything, but im stuck with this one.

EDIT: I don’t know how to identify pin numbers, could someone help me with that?

EDIT 3 : I’ve measured power supply mb connector voltages, it seems to me that these are correct. @jayeff

i forgot to mention that on the opinion of my neighbour ive replaced mobo, but the label which came with the mb (bottom picture) states that it came from the LC420DUE (FG)(A6) screen, but on my tv (top pic) there is (A3) screen, could this be the issue? 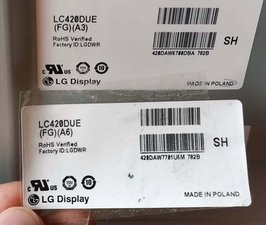 EDIT 3 : I’ve measured power supply mb connector voltages, it seems to me that these are correct. @jayeff

EDIT 4:
I have got two power boards, two motherboards, and replaced backlight leds.
I can turn on the tv, it has sound from hdmi input, backlight leds working but there are no image on the screen.

What do you think should i replace the t-con board ?

Found this on web:

"I bought a new power board, but it did same thing. I put old one back in and then figured out that what is happening is that when the TV comes out of standby, a signal is sent BACK to the power supply on the wire labeled "Fail" and the TV shuts down and flashes the power light. I disconnected that wire (just pulled it out of the connector, carefully by releasing the holding tab on the pin and pulling out the wire). I then plugged the connector back into the power board (with the fail wire disconnected) and the TV powers up normally. I have tested it for about an hour and don't see any issues...so I intend to run it like this and see what happens."

The thing is i already tried to find this fail wire unsuccessfully.

If you could help me with that, please.

on my power board i can't find any wires labeled "fail"

check all voltages as well on the connector from power supply to the main board. (make a list and post on ifixit, it may enable people to help you)

Measure voltages Both with motherboard connected and not connected.

This hopefully can tell you if the fault is in the power supply.

Nice work on measure voltages. Image is perfect we can see the signal names on the board. :)

1. I do not believe the issue is the version of mainboard.

2. from service manual DRV ON signal is a signal from mother board that can shut down the power supply. (best guess this is what happens)

I recommend to disconnect this pin, either by cutting the correct wire (use multimeter mode to find) or disconnect pin from connector if possible.

Goal : turn tv on and find out more by visual screen check on what is error.

self test results via service menu would be nice.

@daller_dk Thank you for your reply!

I have updated the measurements with the other "side" of the pins if that makes sense, however disconnecting drv on does nothing, its the same, stndby led on, power on button pressed, stndby led flickers two times, then off ( i suppose now the tv is on ), at power on press standby led goes on .

In that case I recommend to take out power supply board, and check the mosfets on the interter for the backlight. (the big heatsink next to the power supply connector).

I found this video he show how.

on a similar (not exact same) LG model.

Tried without top2 wire connector, its the same with or without does not matter.

I will try the method shown on the video.

Check what the voltages are on the power board and go on from there. Having no images on the screen whether there are backlights or not means the mainboard but if the power board isn’t supplying the correct voltages then it won’t work properly anyway.

There are several versions of your model using 2 different chassis so here’s a link to the service manual for the different models and chassis that they have.

I’ve checked both chassis models and they seem to have the same pinout/voltages for the power board. 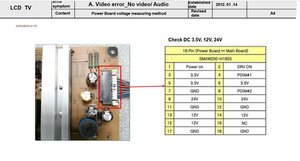 I will check the voltages next week, thanks for your help!

@jayeff How to identify the pin numbers? from which end?

It looks like there is a table printed on the board to the left of the connector between C221 and the heat sink that shows the pin layout. Can't zoom in far enough to make it out though.

I knew that table, but my question was about from which pin should i start, but anyway i think i figured it out. I'm measuring right now, update soon i appreciate your help!