Issues with device powering on sometimes

Just recently fell into a 2006 Intel iMac 17”. I ordered a new processor that maxed it out and attempted to upgrade the memory to 4gb only to find out that amount isn’t supported. The computer would turn on, fans would ramp up, but nothing comes on the screen and no start up chime.

I reverted back to the 2gb and everything booted as normal and was able to do so several times. The next day I attempted to boot and I got the same issue except I had the original memory in it. Strange. However, it eventually went a step further. Sometimes it won’t even power on. I can hear the power supply buzzing but pressing the power button does absolutely nothing. Then, out of nowhere, later in the day I can power on. Sometimes it’ll be days before I can power on again. This morning, after days of even trying, I was able to power on. Everything is working as normal like nothing ever happened.

I suspected power supply initially but this seems to be too inconsistent for that. Either it can supply enough power or it can’t. At least that’s my thinking.

Any help is much appreciated. Thank you for your time.

Edit: I just remembered that this actually began happening when the computer took a nap the first time. I woke it up but it was just a black screen. I forced it off by unplugging and couldn’t get it back on for a few hours. I wasn’t home when it did. My son said it just came on while he was watching TV.

I don’t see any damaged or leaking capacitors. One capacitor is bent a bit 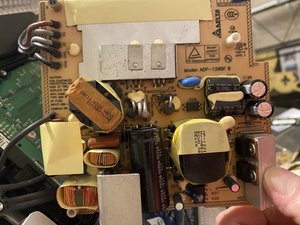 Fleeting problems are always tough to diagnose. I still think you have a power type of issue here.

The issue could even be external of your system! Is your houses wiring new? Older homes often don't have property wired grounded outlets. Get a cheap outlet checker to test your outlets. Even still you'll also want to check the fuse/beaker circuit your system is using is it 20Amp and is your system and its peripherals are the only devices using that circuit? And lastly is the house ground in good shape? From the fuse/breaker panel trace the ground line to the water (copper) pipe or grounding rod, Is the clamp and wire all making good contact to bare metal? If not you'll need to clean or replace the parts.

Is your lights flickering? LED lights are more sensitive. If they are you may want to call the power company to get a power meter plugged in so your power quality can be tested. You still might want to invest in a UPS.

You may in fact have a bad power supply! Your system may have a defective set of capacitors! Capacitor Plague

Carefully check your power supply capacitors is there any leakage or blistering?

I'm going to check that this weekend. That does make the most amount of sense. I ran a test all day today and if I put the computer to sleep I can wake it up without issue every time. I'll open it up this weekend and check the capacitors.