A few days after the iOS 11 update, my iPhone 7's cellular signal has been inconsistent stating "no service" or "searching" for long periods of time. This happens inside my home and outside. Usually I'm able to connect to my cellular network inside my house, but it's been malfunctioning lately.

If I tried updating my phone to iOS 11.0.1 when the phone was not connected to a cellular network, even if I was connected to wi-fi, I was prompted with the Unable to Verify Update iOS. Yesterday, I miraculously obtained a cellular connection and was able to update my phone to iOS 11.0.1 thinking it would fix my cellular problem. It didn't. When I woke up this morning, the phone was back to "searching" or "no service" even though it was already connected to the Verizon network before and after the update.

HOW THE BOOT LOOP STARTED

During the day, my phone turned itself OFF and ON again prompting me to enter my passcode. This happened about two times within a four minute interval. A few minutes later, my phone turns OFF again and attempts to restart, but this time it never passes the Apple logo. It displays the Apple logo for a few seconds and then the Apple Logo would disappear for few seconds. It would then display the logo again and then disappear. This cycle never ends.

Has anyone dealt with this or would like to provide any more things to try? I've never had a problem with an iPhone before when it comes to software, but could it be possible that this is a hardware issue?

Servicecenter conclusion: motherboard needs replacement. My phone was send back to Apple for a new motherboard.

I read in other forums that many had same propblem after updating to ios 11.

My family has 2 out of 5 iphone7s with similar problems. One just fails to startup or restore and the other has the same problem listed in this thread.

I am going to try to make one working device out of the two failed devices but I am not optimistic after reading this thread.

It's just another piece of crap apple product. Next time, we will buy other manufacturer's mobile devices. My family has a stack of dead iphones due to various software and hardware defects. They want you to pay big bucks for Apple care support and they want you to replace your hardware every year. It's how they gouge consumers with low quality, high dollar product to pad their corporate profits. Sorry for not being helpful, but after reading some of these forums, it all makes sense what Apple is doing. It's no coincidence that many failures occur after major IOS updates.

I attended my Genius Bar appointment today at my local Apple Store and the guy told me it was definitely water damage. Apparently it is indeed possible for software to brick hardware as well. I was 13 days over my warranty, but the guy voided the replacement fee for the phone to "make my day", and I backed up from iTunes just fine.

Error 4013 on Iphone 6 nd 6 plus are always NAND, However, after about a couple dozen repairs on the Iphone 7 4013, It has been (90%) BB PMU and (10% Baseband). I have had 2 recently (That we discussed) where the short has been in the Baseband CPU itself and not repairable...and a couple where LDO lines have been shorted from previous attempts at reflowing the PMU and caused shorts on backside on BB CPU.

From what I heard this is a hardware problem within the logic board. I had the same problem with my iPhone 7 and took it to the Genius Bar to get it checked out and apparently Apple is doing a recall on all iPhone 7s with the "no carrier and searching.." if I were you and if your phone is underneath the Apple Program, replace your phone to save the hassle. 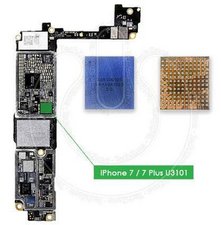 While a reflow might fix it temporarily, it will not take care of the problem for good. Its a know issues and need a micro jumper soldering as well, just like the iphone 6+ touch ic issue

I had the same exact issue - no service, then infinite boot loops - and with the affected model number, A1660. I brought it to apple yesterday expecting to be covered under the repair program. They first tried doing a hard reset - wiping the phone completely clean. This was the first step they take for this situation, as they claim that affected phones won't successfully complete a hard reset in order to be protected under the repair program. Mine did, and it worked for less than a day before going into the no service/bootloop cycle again. Now I have another appointment with Apple tonight. Does anyone have experience with this? Will I be protected under the repair program now because the hard reset didn't work?

Update; went to the Apple store where they told me I was protected under the repair program and they sent the phone off to a repair center. Now I just got an email from the repair center saying they found other damage (on my otherwise perfect condition phone) and the phone is no longer protected under the repair program and needs to be replaced for the full $320. I tried calling the support hotline to understand this “other damage” but all they could tell me was to go back to the Apple store and ask there.

Opened phone removed battery, then progress bar reached 100% and I was welcomed with Lets Get Started, but after activating phone and entering all details and after receiving 1 sms I have standard bootloop issue without progress bar. iTunes restore no help.

Maybe someone this info is valid.

My phone is working.

..so after I got standard bootloop, I found and downloaded iOS 12 Beta. Restored it with Itunes and phone is working without glitch so far. If after week it will be still working I'll try to remember come here and let everyone know. Then Apple is not telly you truth and its iOS 11 - 11.4.1 issue. Just remember without removing battery I wont have working phone at the moment. I tried to flash iOS12 before (when I had loading bar bootloop) and after restoring on first boot I went again in bootloop (with loading bar) not even reaching Welcome screen.

P.s: And I also called Apple as soon as I had first sign of problem, explained about bootloop and that iTunes restore did not help and they sad that then my iPhone is not repairable (maybe they know something we don't know) and as my warranty was over for just 1 week (don't know why always my items break down as soon as warranty is over :/ ) they offered to change my phone to new for 350 Euros /around $411 and that's for 6s, I told them no thank you.

As far as I understand phone is trying to finish task that is corrupt (over and over..) and when I removed battery it forgot about that task and started reboot from null. But then flash iOS 12 not 11.x as there is something wrong with it, that some phone behave like this.

It's a faulty battery. Change it. It will boot up normal.

Changed battery fixed it only for 3 days. Same thing on new battery.

So, I tried numerous times turning on and off my 3 month old iPhone 7 (at&t prepaid) as it was loading with the loading circle. Then I held the power and home buttons at the same time for about 10-30 minutes then it will turn on. Make sure you keep it on for at least 15 minutes to load up. While you have it on restart your iPhone, after that it will go black then start it back up. Last go ahead hitting the power button 3x 15 sec between hitting the button. Make sure you wait for 15 min then it should load up to your lock screen just like normal. (this worked for me)