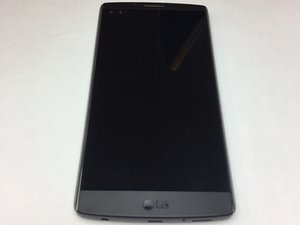 How to fix missing solder pad? 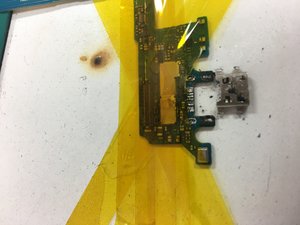 So I am pretty new to soldering. I tried to solder my charging port on my LG v10. When I removed the old charge port I saw that one of the pads that's on the mother board wasn't there anymore. I would like to know what the fix is to that? 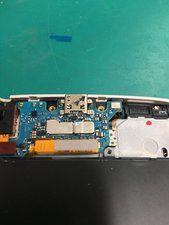 @modifier any chance you can zoom in a bit closer? Looks like a bit of a mess on any of the contacts.....;-)

@oldturkey03 there is a new picture

Don't take this the wrong way, but before doing any more damage on that phone, you should really figure out how to solder properly.

A port like that is probably easier to remove with hot air (a station, not just a heat gun) than just a soldering iron. I've used both and while it's doable with an iron, it's not very easy.

Having said that, since you're already at where you're at, the damage is repairable but you're not going to be replacing the pad. Or at least, I wouldn't bother with it. What I would do is examine the trace that connects to the pad and carefully scrape away some of the solder mask. Once you have some of the trace exposed (enough to attach a wire to), lay down some solder. At this point it'll be easier install the port, soldering all of the other connections, and then solder your wire to the pin on the USB port. Then you can just run the wire to your new solder point, solder the wire to it, and break off any extra wire you have left by gently moving the wire back and forth until it breaks. I've used individual wire strands from a USB cable, for example. Be mindful if you're using unshielded wire not to bridge to any other connections or touch something with the bare wire that should be touched.

Before you do anything though, you're going to need to clean those solder connections up. Get yourself some decent solder braid, some decent flux (I like AmTech), and some leaded solder (I like Kester Sn63Pb37) and use all of that stuff to remove the old solder and create fresh joints. Practice on something else first until you get nice, clean solder joints (preferably on something that actually works so that you can verify your work).

this question is from around 4 months ago

And? Perhaps someone with the same question would like a proper answer.

It's a good answer though!

Try making a new pad. Or hope that there shouldn't be a pad there in the first place.