Where is the inverter circuit in the late 2012 iMac?

some five years after purchase my late 2012 iMac (EMC 2544) suddenly went black with smoke (!) coming out at the top. Apple here initially diagnosed a broken power supply, and later claimed some additional (unspecified) damage, returning the machine without suggestion for a fix (well, buy a new one...).

Opening up the machine I found the power supply unharmed and working, but a mechanically damaged SMD capacitor on the logic board near the two display connectors. The capacitor was shattered, powering up the Mac produced fumes and sparks that had eaten their way around the area charring the circuit board. Not a nice sight. I removed the dead capacitor, cleaned up the charcoal, epoxied some insulation onto the board and soldered a new capacitor in place (SMD soldering is fun...). To my greatest joy the Mac now starts up without fire and smoke, and the four green LEDs on the logic board light up indicating everything is fine. However: the display remains black. Second however: an external display (attached via Thunderbolt-to-HDMI converter) works perfectly fine. And the System Preferences (Displays) do show the black internal display! This makes me think that the internal display is still sound, but that the sparks killed the inverter circuit for the LCDs backlight.

At long last here is my question: where is the inverter for the display?? In the previous iMacs it used to be a separate board. In the "late 2012" model there is no inverter board to be found. Me thinks the inverter circuit is now part of the logic board. Does anybody now more about this? And maybe know how to recognize such a circuit and defects in it? Any indication and help is highly appreciated.

two images added (@oldturkey03 thanks for pointing out how to do this!). First picture shows the location of the defect, second picture shows the shattered capacitor plus its specs. I did remove the broken one plus the intact one just above it to be able to identify it. Then I replaced both with a single SMD capacitor of double capacitance (4.7 microF), as the original two were connected in parallel. Soldering just a single SMD component in that damaged area was more straightforward than soldering two.

@danj System Prefs on an external monitor DOES show the black internal display (in addition to the external one), which does make me think the internal display is intact, and only some auxiliary circuit is blown.

It is my understanding that LCD monitor backlighting is either provided by an Electroluminescent Panel ELP or by LEDs. ELPs require an inverter to provide AC voltage, whereas LEDs run on DC. I was unable to find details on the backlight for that particular monitor, so I assumed it would be similar to the older iMacs that had an inverter. @oldturkey03 are you positive about LED backlighting being used in this case? If so, I stop looking for an inverter.

third image added, shows damaged area after repair: milled some channels into the PCB in order to remove charred material, backfilled the channels with epoxy to insure insulation, soldered new 4.7 microF/25 V capacitor in place. According to the schematic provided by @oldturkey03 (infinite thanks!) 25 V rating is too low, should be 100 V!

fourth image added, shows damaged area after re-repair: the wrong 4.7 microF/25 V capacitor was replaced by two correct 2.2 microF/100 V capacitors (piggybacked sideways). As I couldn't find them in 1206 package, I used the slightly larger 1210 package. Display flaw unchanged: internal display stays black, but shows correct image when illuminated with a flashlight. Voltage readings across the capacitors show 0 V indicating some short circuit. As I am unable to match actual components on the board with the schematic provided by @oldturkey03 and also have no clue what to measure on any accessible test point, I'll consider this horse comatose and just use an external monitor. 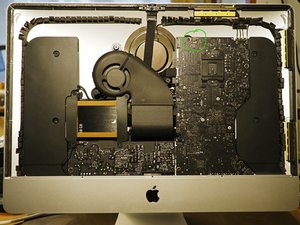 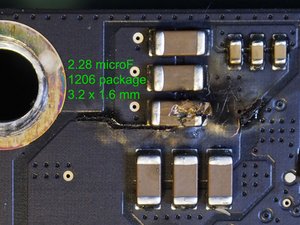 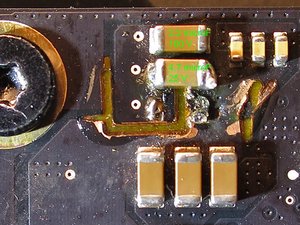 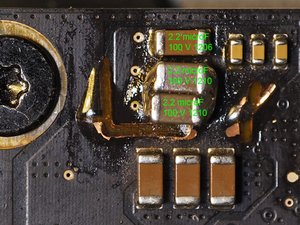 @oldturkey03 Thanks for your help! Below is two more pictures of the identical PCB area back and front, before any repair attempts (for orientation: the bolt hole in both pictures is the same one; bottom right and bottom left show the identical end corner of the PCB). I hope they cover enough area for component identification per schematic. As for the broken traces issue: so far I looked at the board as having just one copper layer on each side, with a black protective coating covering everything. Am I wrong, is there actually two copper layers on each PCB side? Also, is it true that the schematic shows several versions of particular circuit sections, meaning that not everything shown in the schematic is actually present on the PCB? 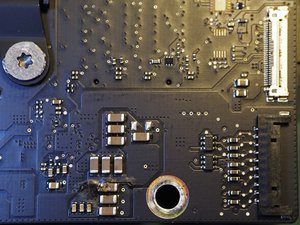 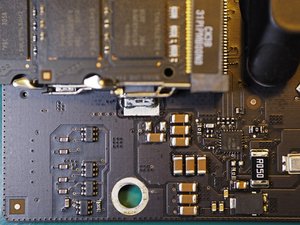 @precognition start by checking the backlight fuse, the LED driver as well as the boost circuit. You also want to post some good images of your board (both sides) and of your repair with your question. For that use this guide Adding images to an existing question What component did you replace ?

like any LED backlight, the circuitry is build around a LED driver. This board has most likely U9700 IC for that.. As you already know, there are many parts involved in this circuit and one can not just do it in a shotgun approach. Unless @precognition provides way more information, there is not much of a chance to get this resolved.

Honestly, the board looks better before the repair. You scratched into the board and the pads looked horrible after the first repair... Are you sure they are not shorted? Check for a short with a multimeter.

@precognition besides replacing the components (good job doing it) you also need to repair the traces. Solder a strand of wire from where the copper is missng

@Gigabit878 I do agree the board looks prettier before the repair. However, when under power there was continuing sparks worming around and steadily extending the charred channels visible in the picture before repair. As this charcoal has significant conductivity I had to remove it with a small mill, going deep enough to expose clean glass fiber/epoxy. To double up on insulation I filled the milled sections with epoxy.

@oldturkey03 the pads of the original shattered capacitor ended up not being solderable anymore. However, the pads of the second removed capacitor (the middle one of the three visible in the pictures) still are. So both 1210 are now connected to the pads of that middle one. To the best of my judgement no traces have been broken in the damage or repair process.

At present me thinks some other bit up or down the path of the booster circuitry has been shorted in the damage process. I am unable to match the actual board with your schematic, so I feel a bit lost (e.g., where is the fuse F9700??).

@precognition so the capacitor that got destroyed is reference designator C9712 and it is a critical part of your LCD backlight. You do want to check your repair very carefully. Check the traces and post an image of your repair after the capacitor got damaged. Yes, there is no designated inverter. Check your backlight circuit according to the schematic. 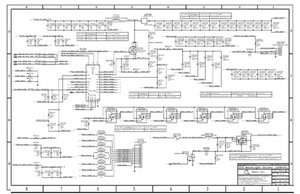 @precognition "To the best of my judgement no traces have been broken in the damage or repair process" sure looks like broken traces to me. Those broken traces do not make contact with anything else. 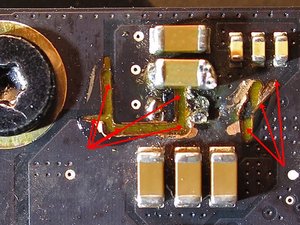 @oldturkey03 heaps thanks for the schematic, you are a blessing! Where do you source information like this? And, how could you tell that particular capacitor to be exactly C9712 (there's a whole bunch identical ones in parallel)? Anyway, I will try to check the backlight circuit as good as I can figure out its intricacies, this is gonna take me some time. In the meantime I found that shining a flashlight into the display does show the correct desktop picture, even if the display is only connected via its data cable (power cable disconnected). So the defect is clearly either the backlight itself, or the backlight circuitry as per your schematic.

@precognition by leaving the capacitor out you left the circuit open. Replace the capacitors with the proper size and repair the trace by soldering some thin wire across it.

@oldturkey03 according to the schematic C9712 is one out of 14 identical capacitors connected in parallel. Leaving one out does not leave the circuit open in my view (the three adjacent capacitors visible in the second picture have common cathode/anode copper areas on the PCB). By doubling the capacitance of one of the remaining 13 even the total capacitance remains unchanged. What I clearly did wrong was using a too low rating for the new capacitor: neither did I expect a high voltage in that part of the circuit nor could I find 4.7microF rated at 100V (in 1206 package). This I will change after somehow confirming that the backlight driver circuit at large is working correctly. Still trying to figure out how to do this exactly...

Okay give it a try and let us know how it is working out.

@precognition post some high res images of both sides of your board so we can mark the location of the fuse etc for you.

I read all the discussion because I found a similar problem in my iMac (late 2013,21 inch):

As you can see in the picture the capacitor exploded and I get black smoke out and when I connect the iMac with the LCD panel still stinks of smoke.

Without the panel the machine boots flawlessly, by connecting an external monitor I can get it working.

I need the rating of the blown capacitor shown in my picture, can you help me? Where can I get those schematics? I really need them. 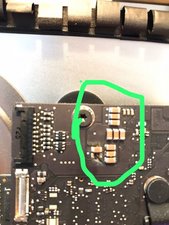 I also have a bad Imac here. 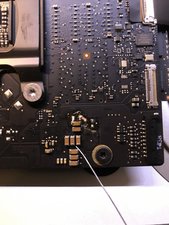 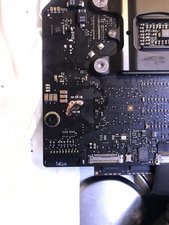 I found the short circuit. it will probably have many the problem or get it soon 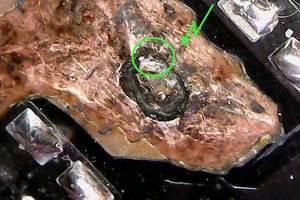 the GND and BKLT BOOST lines are exactly on top of each other. fatal is the mini badly insulated line from bottom to top, between C9799 and C9709. 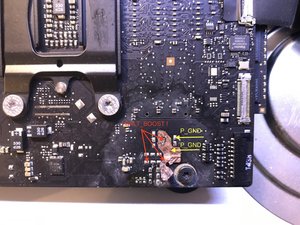 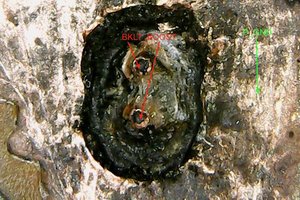 as soon as the new parts are there, go on :)