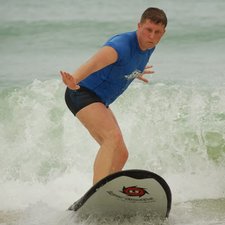 Backlight fuse and wled driver location on logical board a1398 2014

I was cleaning display and during doing it I put the brightness at min level. After that when I turned on brightness, I got half of the LED backlight LEDs not working, and flickering, then after 5-10 minutes, backlight is gone, the Apple logo at the rear not shining either.

If I shine flashlight at the logo, I can see login screen at the screen. The MacBook works fine with an external display.

I did all resets, nothing helped. So, as i investigated the net and this site, it could be backlight fuse. So I did disassemble plugged unplugged wires, looked for visible damage of components tried to locate backlight fuse, but unfortunately I have a newer version of logical board https://47dqy71du7e1rvs1n3ezfll1-wpengin...

I guessed that the fuse is yellow one with "P" sign on it or a big green near it. Does any one know where fuse and driver located on this logic-board?

P.S. When I got that issue, I got the feeling that my (not hard) pushing the screen with napkin during cleaning caused this problem, could it be?

I had exactly the same issue, first half of the LED backlight went off and few days later the rest of them.

There was a spill of mouse pad gel (long story...) which created a layer of lkwqqwgff in the magsafe connector thus not working properly. After cleaning it up it came back to work but LED display not working exactly in same manner as you described.

It was clear that it was caused by that gel but in your case, what was finally the problem? I disassemble logic board totally, cleant and also ran continuity test in fuse and it´s OK, backlight driver looks also healthy so I don´t know..

How about that bottom of the display? is there anywhere where I can look at?

Thank you so much in advance

@dennisfyodorov check the image for the location of the parts. Unlikely that these failed by you pushing on the screen. Anyhow see if that helps. 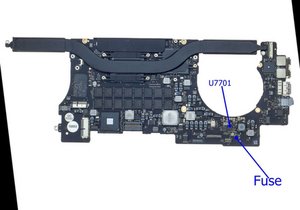 Than you. I measured resistance of this one, yesterday, the resistance is about 0, so it's functional as i guess. If WLED driver is blown does it necessary has to have visible damage?

How did you clean the display? You might have gotten some cleaner into the backlight bar electrical connects at the bottom of the display assembly.

May be a drop of cleaner got to the bottom of display, but plastic cover at the bottom looks sealed from water, when i was removing it, it was very tight attached