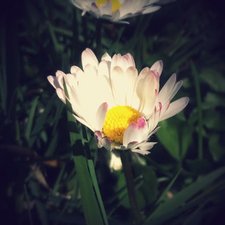 As stated it crashes half way through the boot sequence. I tried resetting NVRAM and booting in Safe-Mode. Both with the same negative result.

It started a few days ago when I had two glitches where the external display would show the left half of the screen on the right side and the other way around. I blamed it on a faulty display cable or the external screen itself.

Today same glitch but but the MBP shut down after pulling the display cable! On trying to boot, the Apple Logo appeared and the progress-bar went halfway through. A horizontal stripe of artefacts (see Screengrab) appeared quickly and the black screen followed by a white screen an the fans starting to run on max speed.

Has anyone encountered a similar problem with their MacBook Pros? I don't think it is the wide spread El Capitan Boot Freeze I'm afraid it is a hardware problem :-(

Just removed the SSD Drive an booted it on an other Mac. Works smoothly. I would rule a out a drive problem.

This is not a solution. I have an identical machine with the same issue. Boots halfway and shuts down. Tried booting from external drive same problem. Called Apple, no solution except to send it in for a "Flat Rate Repair", $357 with tax and shipping. Apple gets it, sees a small dent in the corner where the hard drive is, which affects nothing, and demanded another $300 to replace the upper case. My customer refused the extra charge and bought a new machine. I bought it from him for parts. So if your machine is perfect on the out side I would suggest a Flat Rate repair. You might also be lucky and get a reasonable tech. Apple said it was a logic board issue, they probably know the exact problem but aren't telling. I'll let you know if I can come up with a better solution.

I have two more machines in with the identical issues, Both are MBP 15" 2011. Apple announced a extension repair program 2/20/15. Go here to check if you qualify:

You may have to call directly as they don't tell me you on this link if you qualify. Apple did not bother to mention this program when I sent in the last machine.

I took both machines into an ASP I work with. They have to run a diagnostics test (which I can't get yet) to see if the machine qualifies. Looks like I have lucked out. Both machines failed the test and Apple will have to replace the logic board on both. Apples greed on the one I sent for a flat rate repair got them this time. Now they have to pay for it. Why didn't tech support tell me about this program? They let me send it in then tried to extort an extra $300 for a non-consequential dent by the battery and charge for a new uppercase. Shame on Apple.

I had the same problem and took macbook to local authorized repair. Yep, a qualified logic board problem.

Unfortunately, their diagnostic tool also found that my harddrive is bad. Could the logic board problem (which may be an overheating problem based on the other articles I've read) cause the harddrive to fail? I haven't had any previous harddrive issues.

Does anyone have the Apple test that confirms the bad video on the recall that Apple is really keeping a secret? They did not notify original buyer like they said and are not saying anything about it when you call in for support. The link won't tell you and you have to take every machine into an Apple Store or ASP and then believe if they tell you the truth. https://www.apple.com/support/macbookpro...

I used this for model identification for the correct image:

I'm seeing the same thing on the same config. Just called applecare and they said it might still be covered. Running AHT now to see what it reports.

AHT does not show this recall, you have to take it in.

Yup, AHT says everything is fine.

This most likely cause by a dead AMD GPU. As this Mac also has an internal (Intel) GPU some things might work just fine. Running the ASD EFI version will usually claim all is fine. The ASD OS version on the other hand will usually crash during boot.

As the problems in the dead GPUs are caused by connections coming loose between the silicon die and the carrier that the die is mounted on, and there are very many of those connections, there are also very many different symptoms of having a dead GPU.

1) The most obvious, and tell tale, is when there are coloured lines or coloured blocks or bars in the image on the screen. As the GPU drives the screen even a non-technical user will understand the problem is the GPU.

There are more symptoms however that are more devious, and are nevertheless still caused by the GPU...

2) During booting the Mac freezes with the progress bar stuck about half way. This is the point where the OS switches control to the external GPU. Sometimes the Mac will actually still be running but the image on the screen is no longer updated. This can sometimes be noticed from the busy light when booting from an external drive or the fact that the Mac will respond to keys being pressed on the keyboard (volume up or down for example).

This can be tested by running ASD EFI which does not use the external GPU. All the tests in ASD EFI will pass, yet ASD OS will not even boot.

Things can get even more devious however...

3) During POST (Power On System Test) the Mac tries to talk to the GPU. It is possible for the GPU to fail in ways that cause the POST to crash, rather than give an error. From the users point of view the Mac will simply refuse to turn on. Even the experienced repair technician may not realise that the GPU is the cause. If you open the Mac you will notice that the fans do start spinning when you turn on the Mac.

Test this by removing the RAM. If you now get a long beep indicating 'no RAM detected' you know that the Mac is in fact running. As the RAM is checked before the GPU this test still works even with a dead GPU, giving us a vital clue as to what is going on.

A further test could be to remove R8911 (which we have to remove when placing the Tiresias anyway) and reinstall the memory. This turns off the AMD GPU. Now the Mac will no longer crash in the POST, and although the screen will be black, the Mac should give the start-up chime when turned on.

In all the above cases installing a CMIzapper Tiresias and removing R8911 will bring the Mac back to life!