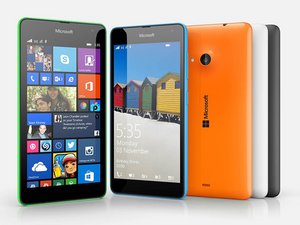 The Microsoft Lumia 535 is an Android smartphone developed by Microsoft Mobile. It includes a 5-inch display and a 5-megapixel front-facing camera.

Why is my phone not charging?

The sudden my phone went off, then charge it to being in charge, but I can not charge the battery or chip off, if only on the phone, watching and writing to Microsoft's low then the phone is closed again, Microsoft Lumia 535, Just 4 months. How do I start?

What if you've had for nearly a year

I have bought two Microsoft phones and have the same problem

and I am not happy, never buy Microsoft again.

I charge my phone whole day .. It shows charging sign but not a single percent charge .. What should i do .. Please guide

I have a Microsoft Lumia 535 (purchased June 2015) and the battery performance is terrible.

When I first got it, the battery that came with it would take three hours to charge to 100% but would only last nine hours, even if I just left the phone on the coffee table and did not use it. I have the data connection switched off, the battery saver on and settings such as screen brightness reduced.

I have found that when I get the "battery critically low" warning, I can switch the phone off with it reporting battery level 5%, go home and switch it back on to plug in the charger and it reports battery level 19% or 20% - clearly it can be recharged by static electricity!

I bought a new battery - looks like the original except not embossed with 'Microsoft' and clearly just a generic Chinese replica. The new battery took seven hours to charge from scratch and failed to last four hours.

I could not recommend this product to anybody. I used to have a Nokia 2G phone that would go fully charged for a week but it seems since it became Microsoft it is all Chinese mass-production and no Finnish technology.

I have the same problem, my phone will not charge

Sanjana Chakraborty, try a different charger and charging cord. If that does not resolve the issue, you can try a new battery. If still unresolved, have the phone repaired under warranty since it is only 4 months old

My phone was sent as an upgrade, I have tried a different charger, also rebooted the phone.

Please try recnating motpbl tames if tatht did not work try caccing the USB If it is not hint you may not have it the rat way if it is bint use a duvit chr If you do niy have one buy one never hoedlele take out the USB it may bintd or eplxp this is how you do it.

Connet charging pin into phone and hold phone in your hand for a while, as soon as the phone vibrates just long press the power button until you see the Microsoft logo appear on screen. Put the phone down and it will just show the low battrey cell on screen. Leave the phone and it will automatically switch- on on its own once it has powered up about 2%. It happens all the time with my phone but the above technique always works or fixes it but i think its a manufacture glitch if you ask me.

turn your charger to the right and charge, the charger was made in india so it will be badly made.