Why is my logic board overheating? 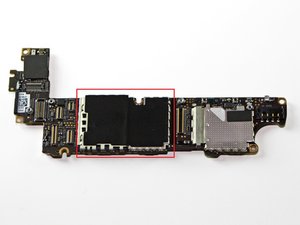 The phone works fine, but it overheats here even with just the battery connected to it.

I repaired the phone's LCD and silent-mode switch, but didn't test if it was overheating beforehand.

Do you know how i can fix this / what is wrong?

edd, overheating is usually caused by components having been shortcircuited. Check around your recent work and determine if any of the components around the connector have gotten damaged.

The previous owner had attempted a screen repair and messed it up (the screen was all patchy with shadows all over it) and he also messed up the silent button which i fixed by un-tangling the flex.

So i'm thinking perhaps he caused this not me so I'm not entirely sure which connectors I should be looking at. I'll clean everything and try a new battery, but if that doesn't work I'm thinking something got damaged in the incident that prompted the need for a screen replacement, do you know which components I should test to try and workout what has gone wrong?

I'm having this problem too. Please provide a solution.

I have the same issue, on a CDMA iPhone 4s, the battery was starting to go out and I replaced it today, this is now a backup phone but when it was my primary, I remember it being a very hot phone, even when doing something as simple as texting or calling. After I replaced the battery I was doing some testing to make sure I did everything right and it was really hot, so I took the back off again and touched the battery, nothing, touched mother board about 1 inch below the camera, and it almost burned my finger. What confuses me is nothing could have shorted before the battery replace, before that the phone had never been opened, it was more hot after the replace, but it was very hot before also. I don't know what to do. Thanks for your time reading this and hopefully I can get this fixed.