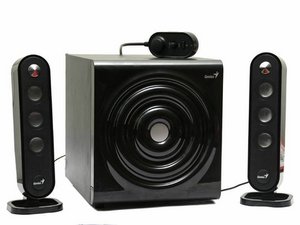 Repair information and support for speakers designed to be used with a personal computer. 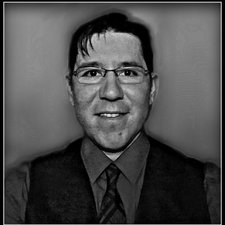 Best Speaker with Sub for Home Use.

I just don't trust consumer reports. I need a reasonably priced speaker system that connects to my MacBook thru it's headphone jack and includes some sort of sub. My question is this: What brand/model number? Please help!!!

If you want to skip the information and see my recommendation the last line has a speaker set I think you might like.

It is very helpful that you mentioned that you will be using the headphone port on the a Mac Book for the audio output, but unfortunately that is a pretty broad question as not only do we not know two key pieces of information:

1. What "reasonably priced" means to you.

2. The size of the room these speakers will be used in.

I'll attempt to answer your question by giving you information that will help you become more of an informed consumer.

Primarily what I look at first is the RMS Power. I like to use common room sizes like dorm rooms (5-15W RMS), studio apartment (60-150W RMS),ballroom (250-500W RMS) comparisons as it gives you an idea as to the power required to fill them with audio.

Science Lesson! ---- There is such a thing as too little and too much in this instance. Some manufactures advertise Total(Peak) Power, which simply put is the highest power a waveform will ever reach versus RMS which is the highest useable (hearable) power. Think of it like the power going into your home where the 120V is the RMS power and 170V is the peak power. The reason this distinction is important is because most people know the threshold of human hearing is 12Hz-20kHz, so it would be silly to advertise your product does 1Hz-40kHz.

Next, pay attention to the signal to noise ratio (SNR).

I heard you ask for more Science! ---- As the name suggests the idea is that the louder a speaker gets the more noise you will hear with the desired audio. A typical speaker has between ~80db SNR, with many higher quality amplifiers delivering 90-115db. The general idea is the bigger the number the better, as getting most systems that boast "Theater Quality" have to meet +95db ratio.

Consider your manufacturer. Big names like BOSE and Klipsch have been around for a while and in my regards still make excellent equipment, but neither are in my price range. Personally my top 3 for affordable computer speaker manufacturers are Altec Lansing, Creative Labs, and Logitech.

Last but not least, pay attention to the design of the subwoofer. The majority of the power from comes from the firing direction and size. Front firing subwoofers are more popular as the subwoofer and is easily identified by the driver(speaker) in the front and the port hole on the side. The other types are down-firing and side firing and.

Ok, just a little more science! ----- Down firing is nice in that it can be placed anywhere in a room as the direction and the audio would be omnidirectional and create a nice, ground shaking sensation. A word of caution, due to the positioning of the speaker, don't use it on carpet as that will further muffle the noise. Side firing subwoofers are intended to be put into corners and have the advantage of being able to simulate both heart-thumping and ground shaking, but are generally only implemented systems that have either a digital line or a 3.5mm line specifically for center/sub. Front facing are intended to be placed in front of the listener and have a significant heart-thumping feeling with still ground-shaking (not to the point of the previous two), and has the advantage of carrying great sounding bass tones directly to the listener, versus the other two relying on the environment.

It's a lot to read but hopefully this makes you have a better idea of what to look for. As a final note, personally I think the Logitech Z-2300 which originally retailed at $115 would be a good choice for you, if you can still find it.

Hands down the cheapest, easiest, best-sounding sub & speaker set for your money.

Sells for around $30.00. Often found in thrift shops for less.