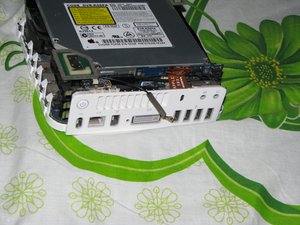 I noticed the connector for my Airport Antenna is disconnected, i went to look for my lost of audio problem when i discovered it, don't know exactly how that has come to be, but as indicated in earlier posts I received the unit semi open as the back of the unit had a gap - top cover from lower portion. Since i got it back from the tech I gave the unit to, to adjust the top cover so that it will seat properly, i've had lost of audio (and up to a few minutes ago and two restarts no audio device, (as per the system info), now it's seeing the internal audio device but still no sound.

About the Airport connector - I have noticed the unit struggling to pick up wireless traffic, while my dell m1210 does it easily, it may be (and it's purely just my guess) that the card will work sans the antenna but will receive lack-luster reception or at best would perform well in a limited range with no interference, but with the antenna connected the range will be extended for a better overall performance. Is this right?

P.S. I was really hoping that on the discovery of the disconnected cable that it was part of the sound so I would have arrived at my own solution but on checking here (IFIXIT) I realized that it was related to the Airport antenna instead.

well guys i got the airport and sound problems sorted out. i gave machine back and had the tech reconnect both connecting cables leading to the two devices, so as a result i got my sound back, but no real improvement with low range of the airport antennae.

since the airport antenna isn't a real high tech device you can check it by simply looking at it - if the cable looks bent or pinched or "broken" in the area around the connector/antenna - than it would normal when the reception would be weaker.

i would go for a second antenna, the airport card of you mini has 2 connectors - any small wifi antenna will do the job - as long as the connector fits (but the regular wifi cards in notebooks are using this connector type) sometimes you can get the antennys from a notebook lid extremely cheap on ebay - those antennas will do the job

Hi Mark. I have to first apologize for the tardy response, i've been extremely busy with work and all and rarely found the time to go online.

I really like your suggestion here...i'll give it a try and see what turns-out thanks again for the helpful suggestions.

hi robert, no problem. let us know if something worked ;-)

Most certainly will. Cheers!

when i got my mini it was a mess - the case was open, cables where loose, airport was missing and the topping was the wrong installed fan - so the unit was switching off after a few minutes

the missing audio hardware could come from a loose connection

That pretty much sounds like what i'll have to do. Who knows what else might turn up. It's my belief that the unit is a good one, and is just suffering from one too many times of persons opening and fiddling (upgrading RAM and HD). So I think this might be the best advice yet, gonna have to get all the right gizmos to proceed with this.

you're welcome. it's a shame what some people sometimes do with their stuff. bought a dead iPod touch on ebay - the seller tried to open it with a screwdriver - without success - it took me less than 3 minutes to open it with my good old plastic bank card (i never hat to open a touch or a iPhone before, but in know to use the card and and i am able to read the great guides here on ifixit)