This is one in a series of guides used in our Dare to Repair 3D-Printed Repair Parts Contest. This guide describes the first phase of the project: Decomposition. First-time readers are advised to read the whole guide; experienced readers can use the quicklist in each step to guide.

For more information—including rules, submission guidelines, and prizes— check out our Dare to Repair contest announcement on our blog. Don't forget, your submissions are due on Monday, May 14.

For easy reference, here's a complete list of guides in this series: 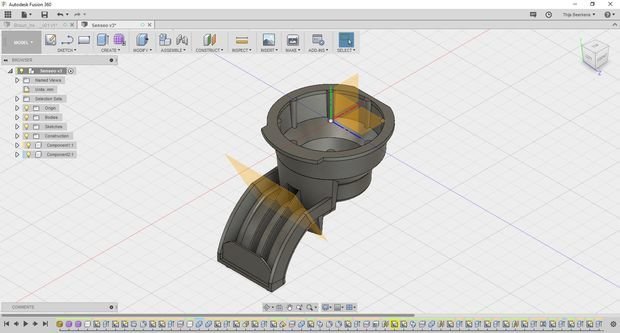 When you followed the decomposition guide and found that the part features mostly measurable, geometric shapes, you probably ended up here: CAD modeling the part.

In CAD modeling, parametric modeling is the most used and also most useful approach, in the context of repair. In parametric modeling, dimensions and other boundary conditions prevent the modeler from creating ‘impossible’ geometry—essentially only building fully defined, solid geometry that is reproducible through manufacturing (for instance in a 3D printer).

Basic parametric modeling often starts with dimensioned, 2D line drawings called ‘sketches’, that are turned into a 3D solid using a feature. The 2D sketches are drawn on a plane, which is a defined, flat surface in the cartesian coordinate system. A basic 3D modeling space based on this system consists of three axes (X, Y, and Z), intersecting in the Origin. Often, three base planes are already active (XY, YZ and XZ) and are a convenient starting point for many 3D models. A 2D sketch is created, drawing the contours of the model to create a closed boundary profile, that can be converted into a 3D shape. Extruding the inside of this sketch contour, for instance, creates a 3D shape by ‘pulling’ the surface from its plane, creating a second, parallel surface and a ‘wall’ between the two that follows the contour. Revolving the sketch around an axis creates a circular 3D shape that is infinitely symmetrical around that axis. Sweeping a sketch profile along a line in another sketch (the path) results in a guided extrusion.

By starting with basic shapes, building shape-upon-shape and using the same techniques to create solids that can be ‘subtracted’ from previous shapes, the 3D model will take shape.

CAD modeling software can be really expensive. Luckily for you, Autodesk recently launched a complete and intuitive CAD modeling program called Fusion 360, which is free for Students, Hobbyists and Start-ups. It’s got plenty of features and an intuitive interface, which makes it ideal for beginners. This guide focuses on Fusion 360, but it should work for any parametric CAD modeling software that you might already be used to. 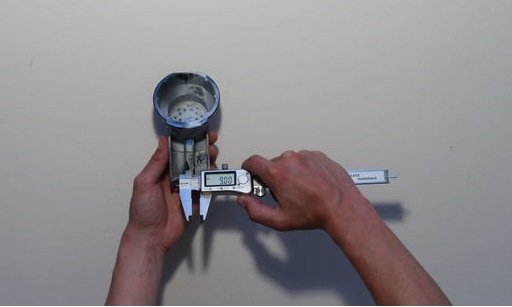 Take measurements with a caliper. Use the main jaws for outside dimensions and the back jaws for inside dimensions. The depth probe on the bottom can be used to measure cavities! 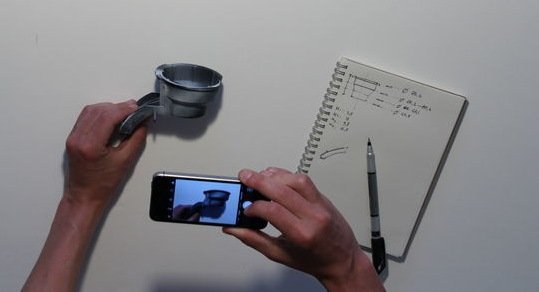 Document as much as possible! The more you measure, the more accurate your model can be dimensioned!

The first thing you have to do is to take as many measurements as possible! Try to dimension every shape you find, measuring point-to-point from references using the caliper. Any sharp edge or corner between two parallel surfaces and diameters of cylinders are to be measured. (In case you do not know how a caliper works, have a non-digital (Vernier) one or want a quick refresh, read this excellent short guide on Instructables: How to read a Vernier caliper.)

Make sure you measure to an accuracy of at least 0.1 mm. Many plastic parts are designed with even higher tolerances (to fit perfectly onto other parts), but 3D printing accuracy is generally limited to about 0.1mm.

Make quick sketches of your part and note any corresponding measurements you take. Indicate the exact points you measured from, as you will be dimensioning your 3D model similar to the way you took the measurements. 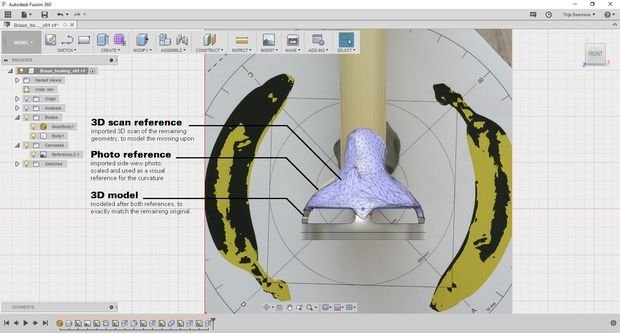 Start by creating a 2D sketch on a plane. As you review the original part, try to think of a ‘logical’ orientation, which makes sense in the 3D modeling environment. Often, some faces or features line up with the base planes and axes of the coordinate system. Do the same when importing a 3D scanned model. Try to align the scan to the coordinate system in a way that is convenient for your modeling operations.

Try using extrusion operations for shapes with two parallel surfaces. Use revolve or sweep operations for cylindrical shapes to create 3D shapes from the sketched profiles. All resulting bodies can be set to ‘add’ or ‘subtract’ geometry from previous shapes.

Modeling Alterations Onto a 3D Scan

If you start with a 3D scan, as described in the 3D scanning guide, it can be imported into Fusion 360 to model further additions and alterations. To do so, open the Sculpt environment by clicking Create Form. Import the exported .OBJ ‘quads’ model (see 3D scanning guide) and convert it to T-spline by right-clicking, Convert.

The new body should be oriented similarly to what you would choose when modeling from scratch. Think of the alterations you want to model; it is much easier when these can be aligned with the base planes or axes of the system. After moving and rotating until satisfactory, close the Sculpt environment to return to basic modelling and proceed with the regular Plane-Sketch-Feature operations, which can be used to either add or subtract geometry from the scan body.

When critical features include curvature, particular angles or other immeasurable geometry, you can use photo references to approximate these difficult shapes. This can be done in two ways: either take pictures of the critical features and import them on a plane in the modelling environment, aligned with the model, or process the photo to use directly in modeling.

Take pictures of the critical features of your part or in the context of the complete product. Include a ruler or other measurable reference in the picture, to help scale the image in Fusion 360. Think of convenient views to do so, such as a ‘Top view’ or ‘Side view’. These pictures then capture the outline of the part, viewed from a logical perspective that corresponds with the base planes in the modeling environment. For instance, the parting line on this iron’s backplate is best viewed from the side, so I took a side view picture and used it as a visual reference to recreate the curvature. 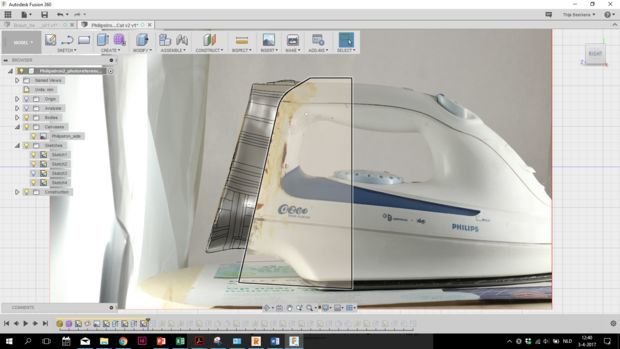 In Fusion 360, under Insert > Attached Canvas, the image can be imported onto a plane and scaled/oriented to match the model you are building. To scale the image, you can either drag and adjust, or right-click the canvas in the browser (left) and use the Calibrate function to scale point-to-point (providing a fixed distance between two points).

Another option is to process a photo for direct use in modeling. This requires a vector drawing program such as Adobe Illustrator to ‘trace’ the photo into a vector image. This is particularly useful for accurately producing a curved outline. Again, providing a scale reference is important. Instead of a photo, a 2D scan of the part, on a regular flatbed scanner, can also be used, which automatically scans to true size when a standard paper size is chosen.

Import the image into Illustrator and trace it into a black and white vector image. The threshold and accuracy settings can be adjusted to create a usable result. Expand and clean up the vector from any undesired details by removing all anchor points other than the contour. Don’t forget to scale the traced image using measurable references! Use Object>Path>Simplify to smooth out the tracing result if necessary. Export the resulting vector in a .DXF format, to insert into Fusion 360. The vector image is now imported as a sketch, creating a usable contour for further modeling.

Proceed on to the Phase 3 of this project: Reproduction