Two men sit in a Delhi shop with shiny metal cylinders stacked from floor to ceiling. When I first saw this picture, I couldn’t figure out what they were—not motors, not gears, not wheels. Want to make a guess? I’ll give it away after the break, along with a video of them in action. 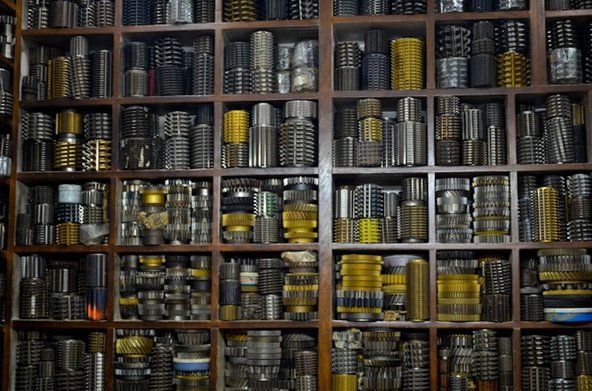 They’re hobs, used to machine gears. Hobbing (which, by the way, is my new favorite word) is the process of cutting teeth into a blank to make gears, splines, and sprockets. The hob is mounted on one spindle, the blank on another, and then they both rotate in opposite directions at different speeds depending on the gear ratio. As the spindles turn, the hob gradually cuts teeth into the blank. You can see this process in the video below:

Even when they’re not spinning, I find the rows and rows of hobs mesmerizing. Interesting, too, is the way they’re being sold: the shelves aren’t labeled, and the hobs are only vaguely organized by size. You’d think that something as precise and carefully engineered as gear cutters would be sold in a shop organized just as carefully. But markets like this in India operate really differently from what I expected—people are more likely to come in with a physical example of the object they’re looking to buy rather than a name and part number. Additionally, having the hobs out in the open like this serves as easy, free advertising for the shop. If it weren’t for the cell phone on the counter, I’m not sure I could date these photos. This is likely just how gear hobs were being sold a hundred years ago. 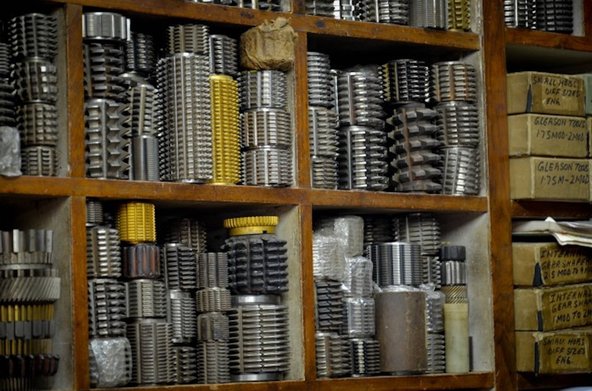 Even with so little text (when was the last time you visited a retail establishment that didn’t even display prices?), the shop’s multiculturality is obvious: the writing over the archway to the back is in Arabic, and the writing on the boxes is in English. I didn’t realize until recently that 13.4% of Indians are Muslim.