Elizabeth Chamberlain helped launch iFixit’s advocacy arm in 2012, writing about repair and e-waste. Then she left to go to graduate school and become an English professor. In January 2022, she came back, as iFixit’s Director of Sustainability.

Director of Sustainability at iFixit

I’ve had a winding path to this role: I started writing with iFixit in 2012 for the blog and for places like Business Insider and The Atlantic, after getting my Master’s in English at Cal Poly. At first, it was just a job, something to do in the year between finishing my Master’s and starting a PhD. The more I learned about repair, though, the more convinced I became that our collective future depends on it.

Even after I left to work on my PhD in rhetoric and composition, I continued to write on a contract basis for iFixit, developing the articles that lay out the perennial case for repair and occasionally editorializing with Kyle (e.g., this piece for Wired).

When I finished my PhD in 2016, I joined the Department of English, Philosophy, and World Languages at Arkansas State University as an Assistant Professor. There, I taught courses including technical writing, digital writing, and composition theory. In my technical writing courses, fabulous groups of students produced iFixit guides—such as this set of Ninja blender guides, this set for the PS Vita Slim, and this “how to fix a broken zipper” guide (that I’ve used in repairing my own clothing!).

From 2019-2021, I was Director of First-Year Writing at Arkansas State, which meant that I developed curriculum and trained new instructors of composition. I also co-edited the third and fourth editions of the A-State collection of student writing, Pack Prints.

In my academic research, I examined web writing and culture using a blend of data analysis and rhetorical analysis. Though the subjects of my study varied widely—DIY fashion blogs, Jenny McCarthy’s anti-vaccine rallies, the controversy surrounding Blizzard’s ban of the Hearthstone player Blitzchung—I favored mixed-methods examinations of the intersection of digital media and culture.

I have publications extant or forthcoming in The Edinburgh Companion to the Essay, Computers and Composition, Studies in the Humanities, and Trace: A Journal of Writing, Media, and Ecology. I also wrote occasionally for academic blogs (e.g., In Media Res, The Journal of Interactive Technology and Pedagogy, and The Humanities in Transition). I continue to serve as a section editor for the peer-reviewed online academic journal Kairos: A Journal of Rhetoric, Technology, and Pedagogy.

The pandemic forced for me, as it did for so many people, a reconsideration of my role in the world: I became more and more aware of my global citizenship and the importance of individual action. My academic work had increasingly focused on ecorhetorics and issues of sustainability. But with every Intergovernmental Panel on Climate Change report that was released, I felt more frustrated by the hand-wringingness of academia, the focus on problematizing instead of taking action toward social solutions.

When I was invited back to a full-time role with iFixit, with a focus on mitigating climate change through corporate and political action, I was thrilled by the opportunity. These days, I am taking action to improve our collective impact on the planet by advocating for right-to-repair legislation, repair-friendly design, and environmental standards that require repairability and modularity.

Though I just rejoined iFixit full-time in 2022, I’ve been writing for iFixit for over 10 years.

Sustainability is a little out of my academic wheelhouse, but it’s been an interest of mine for as long as I can remember.

In college, I was co-founder of a fluorescent light bulb recycling student organization, the Light Up the World with a Dim Light Bulb Foundation (which I wrote about in this ancient iFixit blog post). We made persuasive fliers with important facts—e.g.,  broken fluorescent tubes resulted in the release of 370 pounds of mercury in California in the year 2000—and visited local businesses, trying to convince them to make a recycling plan for their tubes.

The more I’ve learned about sustainability, the more I’ve become convinced that we need collective and legislative action to fight back against the destruction of our ecosystems. But I love Rebecca Solnit’s take on the balance between individual and collective action on climate change:

It’s not good enough for a bystander to say “I personally am not murdering this person” when someone is being stabbed to death before them (and those of us in the global north have countless ties to systems that are murdering the climate, so we are not exactly bystanders). The goal for those of us with any kind of resources of time, rights and a voice, must be being part of the solution, pushing for system change. To stop the murder.

I’m trying not to stand idly by while my planet is being stabbed to death. Through my work, I'm fighting for legislative and ecodesign change. Through my personal choices, I aim to support a more-sustainable world—composting, gardening, using solar panels, buying less and preferring used. Sustainability is always about tradeoffs, and I know there are many ways I can work to be better. But fixing our things to keep them working longer is an important place for us all to start. 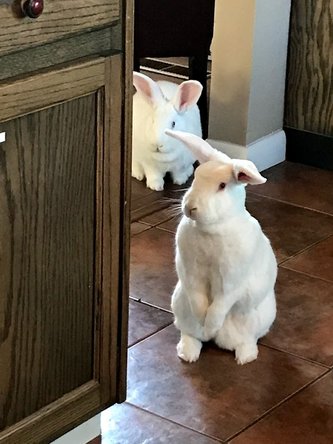 I’ve got two pet rabbits (Cooper and Clementine, a New Zealand White and a Flemish Giant) and a tortoise (Tammy, a 26-year-old Russian desert tortoise who’s been with me since I was 9).

I like to run (I’m only barely faster than Tammy, but I’ve completed six half-marathons), play board games (before the pandemic, I was a big fan of Pandemic, but it hits a little different these days), and make music (in decreasing order of expertise, I play the piano, violin, guitar, ukulele, and trumpet).

Where Else to Find Me