“One of our jobs as human beings is to help make other people smile,” Cindy says as she shows me around Free Geek. Amidst the disarray of torn apart monitors, data-wiped hard drives, and ribbon cables, Cindy sits proudly at her workstation where she volunteers assembling computers as part of Free Geek’s Build Program.

Located on the east side of Portland, Oregon, Free Geek is a non-profit reuse organization. Its mission: provide access to computers, the internet, education, and job skills to the local community. Like iFixit, Free Geek maintains that repair, refurbishment, and reuse are better than recycling. Instead of becoming scrap metal, an older computer can be updated and used again––in other words, refurbishment gives technology a second useful life.

That’s why Cindy and others volunteer at Free Geek: they want to help put technology into the hands of the people who really need it. But there’s an added perk: this nonprofit teaches their volunteers valuable technological skills for the computer age. Many come to Free Geek with little prior knowledge of computers. “By the time they leave,” says Free Geek Reuse Program Coordinator Sean Ellefson, they are “able to do a lot.”

Free Geek has multiple volunteer paths that teach people the ins and outs of computer hardware, and some software basics. Using donated computers, volunteers either recycle nonfunctional parts or test hardware to build machines for local nonprofits, other volunteers, or Free Geek’s thrift store. Each refurbished computer runs the (free and open source) Ubuntu Linux operating system. After rebuilding at least five computers, the volunteer can take one home for free. 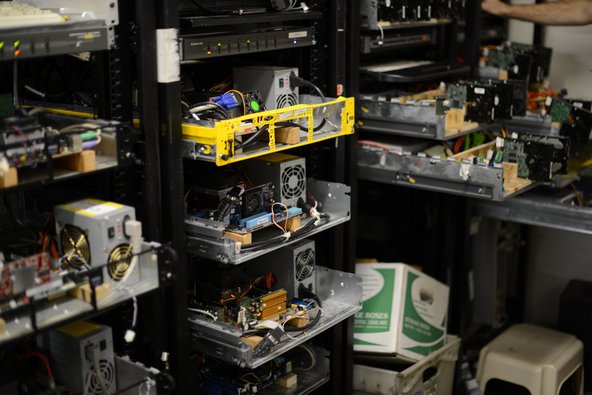 Free Geek also offers multiple classes for volunteers, on everything from “Leaving no trace in the digital world” to “Linux command line.” Since Cindy started volunteering, she has taken several classes—some multiple times—and gushes about their importance: “People have trouble understanding how computers work, but we shouldn’t. If you want to do more than read your email, you should start learning.”

And she’s proof the classes and training work. Despite coming into the program with almost no computer repair skills, she has now personally rebuilt over a dozen computers. And she feels confident that she could handle any general computer problems on her own. But, for volunteers, the real value of Free Geek goes beyond that. Picking yourself up by your bootstraps is hard work. Free Geek makes it just a little bit easier.

“I had no income. Zero dollars in the bank,” said Cindy. Since she began volunteering at Free Geek in early 2012, she has learned everything she can about computers. She now has a long list of in-demand, marketable skills. The volunteer program has helped kickstart Cindy’s dream of becoming a digital Jazz composer and her goal of developing a high school jazz curriculum. She now has a Pentium 4 3.8 GHz machine and praises Linux’s ability to help her compose music. “If you want to do high end audio work on an old system, you have to use Linux,” she says. The open source software runs much faster on older machines.

Cindy now continues to take courses and occasionally volunteers to troubleshoot computers. “I have a magnetic personality: I attract computers with strange problems,” she laughs. The educational atmosphere and energetic working environment draw many volunteers to continue working at Free Geek long after they get their free computer. However, as numerous long-term volunteers explained, one of the biggest reasons they leave Free Geek is that, with their new computer skills, they’ve been able to nab paying jobs—and that’s the biggest victory of all.