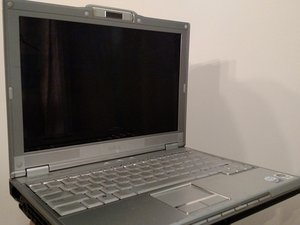 The 12-inch screen laptop was first sold in mid-2006, and was considered well-equipped, powerful, and ultraportable.

Why do I get strange lines on screen on start up

I have a warning in device manager on the NVIDIA on display area is there any updated drivers? I have tried to find a compatible driver other then the GeForce Go 7400.Could this be related to the lines on start up?

Does your display clear up once it has started? The "strange lines" appear when your OS starts or the moment you start your computer?

Sorry this isn't an answer, But I have the same problem too and It's only when I turn on the phone

The phone or the computer?:-) Now nobody will know what hardware you have. You might need to use the "Ask a question" link on the right side of this page and give more information about your device.

I had a similar issue with my Dell Vostro 3700 running a GeForce GT 330M (windows 7 Pro, 64 bit). When I first got it, the screen would flicker and get odd lines on start up, but stabilize after the log in screen came up. Updating my driver took care of the problem, it SHOULD fix your problem. Are you sure your downloading the correct driver (32 vs 64)? Make sure you download straight from nVidia. Do you have your video settings set so that you are using your graphics card and not internal graphics?

To resolve the problem, it would require a way to keep the cable connector and the connector at the motherboard to remain in close contact, even as the temperature increased. One way would be to replace the connecters at the motherboard and on the cable. Another way is to force the existing cable connectors to remain in good electrical connection as the temperature increases.