Slight distortions on screen after removing adhesive from iPad display

I performed a battery replacement on my iPad Pro 9.7” and before sealing the display back onto the rear case I connected the display cables and powered on the unit to make sure everything was functional. That’s when I noticed a patch of the screen in the lower left corner that had some distortion/discoloration and streaking (pictured), though the touch screen seemed to function without any issues. 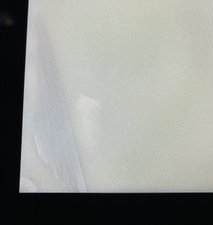 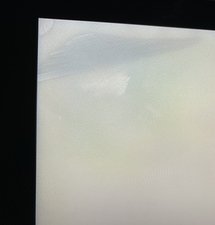 I had used 91% isopropyl alcohol in a needle tip bottle along with a plastic opener tool to scrape away the adhesive from the display assembly and my suspicion is that some of the alcohol managed to run between the glass and the display then got trapped. So I powered down the unit and disconnected the display then placed it on top of a box fan (in a safe position of course) to try and dry it out. After a while when I tested it again the distorted patch was noticeably smaller so I left the display out and disconnected overnight and this morning it’s gone from a patch down to some streaks that I can’t even really capture in a picture (pictured lol). 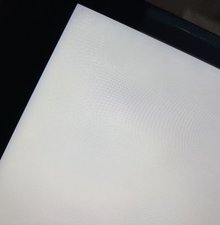 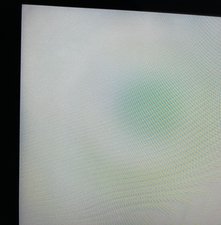 I’ve got it back on top of the box fan to try and dry it out more but I’m wondering if anyone can offer any tips on better methods to resolve this. I don’t know anything about how the display is assembled so don’t know if heat would be a good option (like a hair dryer or leaving in the sun) or could somehow exacerbate issues with a glass/display adhesive caused by the isopropyl leak.

Also worth noting is that it wasn’t exactly accurate to say the touch screen worked fine, on the second display test I noticed a section in the opposite bottom corner of the distorted patch where the touch screen wasn’t working, and had some wonky issues like the shutdown slider releasing halfway when I tried to slide it to power down the unit. The display was pretty dirty at this point and had a little adhesive residue on it from earlier so I wiped it down good until it was crystal clear and pristine. After that the touch screen started working properly so I assume that was just an issue with gunk on the front, but I figure it may be relevant so had to mention it.

Don't know if you have the tools available to you, but if you do, whipping up a makeshift vacuum chamber would help get any residual alcohol out of even the smallest spaces. I'd put it under light vacuum (maybe 10 in Hg) and let it set in it for an hour or so. Also a great way to remove water from every crack n crevice if needed.