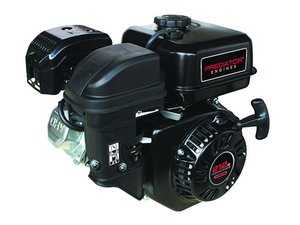 Repair guides and support for a wide range of small engines.

I have done a bit of research to try and work out what the problem may be, albeit unsuccessful. Although I keep reading that the nut that secures the fuel bowl on the carburetor has a jet in it. On my machine a Qualcast Classic 35s (1998) it does not have a fuel jet on the nut, I’m confused. I would appreciate any advice.

Thank you in advance.

give us a bit more information about the starts but wont run. Have you adjusted teh carbs jet's? what have you checked thus far?

It starts ok but only runs for about 5seconds and shuts down, I have not made any adjustments to the carb, although I have cleaned the tank and fuel lines and the float chamber. I have to get some fuel now before I can try again.

The carb is a Dellorto FHC 20 If that helps.

You didn’t say how long the engine runs when it starts. Does it die right away, does it run for 2 seconds? 5 seconds? If it starts, I suspect everything is OK as far as spark and carb adjustments. So don’t go messing with the mixture screws until you get it to run.

I’m pretty sure you’re not getting enough gas to the float bowl and it might be full of crap along with your fuel tank, fuel line, filter if there is one. Dump the gas into a container so you can see it. Replace it in any event. Blow out any lines you can with compressed air - follow the gas line from the tank to the carb. The fuel shut off could be partially blocked. If you have the wherewithal, take the float bowl off and clean it, and see if the float is free and if it’s pushing the needle up and down when you manually move it. Get some carburetor cleaner and squirt it through whatever passages you can get at to see if they are free.

Thank you for that, it runs for about 5 seconds and shuts off, I have done as you advised, the tank and fuel lines are clean including the in-line filter, I also blew through the inlet on the carb and operated the float by hand and that seems to be operating correctly. I now have to go and get some fuel before I can try again. Oh and the carb cleaner. Thanks again I will let you know the outcome.

It would be helpful to hear how it stops running. For example if it starts with the choke on (closed to restrict the air intake) it might only run for about 5 seconds and die from too rich of a mixture. I assume you turn the choke off once it starts. Although a cold engine might die if you turn the choke off too soon also, and that would happen in about 5 seconds because the mixture is too lean - not enough gas. If this is the case, leaving the choke on when it starts should make it run a bit longer and indicate that the mixture is too lean.

You can try a couple of things to check the mixture. You could carefully squirt some raw gas into the carburetor intake (take off the air cleaner so you can see the choke and the throttle butterfly), once you get it started. This could be tricky and dangerous. If you have starter fluid, which is basically ether in a can, that would work, or even carburetor cleaner which is combustible might work. Anything to add richness to the mixture going into the engine - if this keeps the engine running longer, it’s a sign that the engine isn’t getting enough gas.

Or, here’s another thing to try: there are usually two screws on the carb. The idle adjustment, and the idle mixture adjustment. With the air cleaner off, you should be able to see the idle adjustment screw open of close the throttle butterfly - the one “behind” the choke butterfly.

The mixture screw: screw this in, clockwise, but carefully count the number of turns. I count half turns. Most screws are about one and a half or two turns out, ie 3 or 4 half turns. Count the turns so you can put it back where it started. Then take it all the way out - don’t lose the spring if it has one. The spring keeps the screw from turning while the engine is running. Then squirt carb cleaner into the hole. This will hopefully clean out any gummy stuff inside the carb’s idle mixture plumbing. Put the screw back in and try it. Then turn the screw in maybe a half turn, and out a half turn from where it was. See if this changes anything. If it runs longer, keep experimenting and maybe you can get it happy.

The other thing that messes with air gas mixture is if the carburetor is not tight on the engine, so air leaks in and leans the mixture. Check the mounting screws.