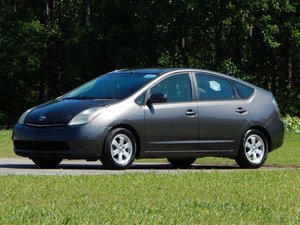 Presented at the April 2003 New York International Auto Show, for the 2004 US model year, the Prius was completely redesigned. It became a mid-size liftback, sized between the Corolla and the Camry, with redistributed mechanical and interior space significantly increasing rear-seat legroom and luggage room.

My smart key fob for a 2008 Prius no longer works as a remote. The

dash the car starts. I replaced the worn shell and the fob continued to

worked for about 2 months. Then died. I've taken it to an auto locksmith.

when a button was pressed. They tried to reprogram the fob to no avail.

Then they attempted to program a new fob. This also did not work. I was

told it might be a bad fuse in the car. On a chart I located two fuses that

work with the smart system, but both also monitor power for number of

other systems all of which are operating normally. I was told this has to go to

Replacing the fob’s battery has solved the problem of a fob that stops “broadcasting” for me. I’ve replaced it a couple of times over the years. The battery seems to last for 2 to 4 years in my experience. You need a tiny phillips screwdriver to open the case. Depending on where you carry the fob, the outside may be encrusted with lint that shouldn’t be spilled inside. You can buy the little battery at any hardware store. If you have any small flashlights or other items that use this type of battery they are much less expensive at sciplus.com .

I never had any little red lights inside so maybe your problem is something more complicated.