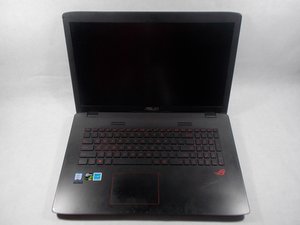 How to fix ribbon cable attachment to touchpad

I opened my laptop to clean dust out and while prying the keyboard open two of the three ribbon cables came undone on their own. I've fixed one (the skinny one on the right when you're facing the screen) but the one leading to the touchpad (skinny white one on the left) possibly broke? The end connected to the motherboard with a snap in latch is still attached, it's the other end that attaches to the touchpad may be broken (there's no way to snap it in - did I break that?) The cable itself seems intact and the end of the cable has the silver metal lines that make the connection.

The computer works fine except for the touchpad being completely dead. I haven't been able to find a picture of what it should look like when attached.

Any help is appreciated! I'd rather fix this myself than take it in someplace. 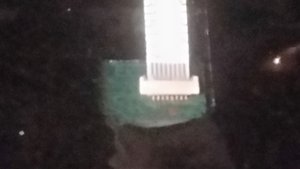 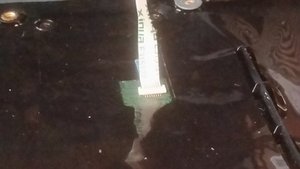 Images of reattached ribbon wire - my partner slid it in metal pieces up but the touchpad does not work. There's no clip on this attachment. 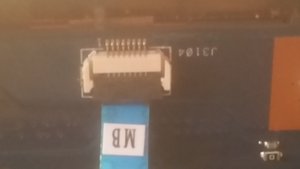 This is the side that remained attached to the motherboard.

Looks like we slid it in upside down, and I think the pins are now bent. Thinking I need to replace the touchpad now. There seems to be no way to slide it in and taping the ribbon wire down doesn't work. 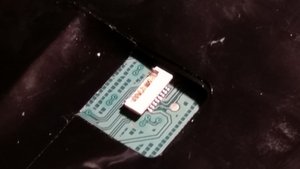 Thank you for responding. Are the metal connectors supposed face up or down?

If there is another ribbon cable nearby, the cable may plug in the same way as that other cable. Also, since this cable has been plugging into that socket for a long time, it will probably naturally plug in the right way. But you can confirm the direction by looking in the socket. Get a magnifying glass and a flashlight, so you can see what is in the socket.

Thanks. I just posted an update above - it looks like we forced it in upside down - the pins are bent now. I'm thinking I need to replace the touchpad?

If you aren't completely sure that you can straighten the pins, then yes, you need to replace the touchpad. That is, unless you can somehow remove the cable from the touchpad and then replace only the cable. You'll have to find out if you can buy just the cable. Perhaps someone on Ebay would have a replacement cable or a replacement touchpad with cable. Ebay is a good place to look for stuff like this.

Thank you for your help.

Sorry about this late answer….

But this just happened to me last night with my laptop, I had to open it up to get at the battery, go figure, a hard wired battery, yeah no kidding hey, so the battery was dead and it no longer powered up and everything I was reading said to remove it, so I got in and took it out, meanwhile the keyboard's ribbon had become dislodged.

Where it plugged in also has a little flip top locking bar, so slide it in, lock the bar down without moving the ribbon then you can even test it without putting it all back together, power it on, if the keys all work, then great, if not then just reseat the cable and try again, you'll get it, have a two inch by two square of packing tape close by, or whatever you have on hand, after seating the ribbon then you flip the locking bar down and immediately stick the whole area down with the tape,so the bar doesn't flip back in up or the tape pops out, there's nothing in that area that produces any heat so the tape won't hurt anything.

Be careful though because there's another ribbon there sometimes, depending on how yours is put together, it's about a ½ inch wide & fits into a similar type of locking connector as the other one, just smaller.

With my system, BOTH ribbons popped out upon opening the laptop case, the smaller one works the same way, with a little wee tiny flip bar on top.

Put tape over that one too afterwards of you like, again, no heat issues by using tape in that area. Actually, I'd suggest using a little tab of black electrical tape rather than the “scotch” type or the “packing" type that goes in those dispensing guns for taping boxes.

While you're in there, everywhere you already see tape holding down a connector, just reapply a new piece over top of the existing peice, over time all these stuckdown prices come loose from heat and age, wouldn't hurt to secure them all.

Give everything a good huff and puff, get the dust out, you'll see a fan blade, an old tooth brush lightly down inside then flick up and out of the blade and again, huff and puff the residual dust out of the machine.

Or just blow it all out of everywhere with an air canister.

I know this post is years late but people are still reading it I'm sure, hopefully it helps someone, it would have helped me last night. However, I did get the ribbons seated and the original issue fixed, by removing the dead battery pack from inside, now it runs fine, it just isn't mobile anymore, it'll work so long as there's a plug close by, fine by me! I never really took it anywhere anyways.

Best regards to you all, may your issue be swiftly rectified!

Hi.can anyone tell me if there's a way for me to fix the retainer clips for my touchpad. I accidentally remove it. the lock is broken. And I dont even have an idea if I can fix this.please anyone.