What is this chip?

While replacing my screen, this chip burnt.

Anyone know what it is? Worth trying to get it replaced? Or is it trash? 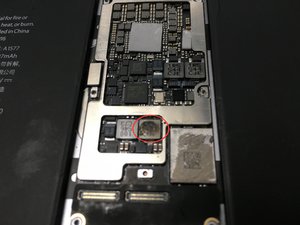 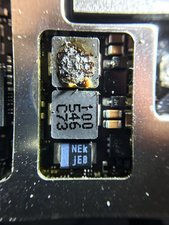 I'm doing some research, I'll see what I can find.

Could you get a better focused version of the second chip? From what I've found I think this is a power delivery, but I'm not sure.

Do you know what caused this burnt chip?

Not really. User error of some kind.

There are no schematics yet for this device but considering you blew this replacing the screen, it's pretty safe to say that this is a backlight coil. It looks identical to the one next to it, which is a 10uH Inductor. The problem here is getting one that's rated properly for current.

The closest proxy is the iPad Air 2 and on that device the coil is rated for 4A. Considering the large screen, these coils are probably rated for even more current draw. The other thing to consider is that if the coil blew, you probably also blew the backlight diode and there is a possibility that the PMIC was damaged as well. Blowing a coil means a lot of juice flowed through that circuit.

At this point, you should consider having this looked at by an experienced micro-solderer (maybe that's you...you don't say if this is a DIY or professional repair).

To me, this component looks more like an SMD inductor. Usually, square grey packages with two leads are inductors, since there is a circular coil of wire inside them. The 100 denotes 10 uH. You should be able to get away with purchasing any 10 uH inductor in the correct size and the search functions on Mouser will let you do this with relative ease.

Here is a link to the fixed inductor category on Mouser, filtered to 10 uH, just measure the size of your burned out device and add it to the smart filter and that should get you somewhere in the ballpark.

No guarantee this will fix your device though, it looks like the inductor conducted a lot of current which may have damaged other components.