I wanted to update my old Mini A1283 with a working SSD from a dead laptop.

I also cleaned it and completely tore it down, including removing the heatsinks for changing the thermal paste.

If I start it up the light turns on, there's no chime and the fan slowly spins up to about half speed and then slows down. It doesn't respond to anything except from the power button. I tried everything (rebuilding it entirely, changing the RAMs, trying a single slot, resetting the SMC, changing the internal battery, even trying if it does the beep without the RAM). Nothing.

I read on internet that, if I press for 5 seconds the power button while I insert the power cable, release the button and press it again to turning it on, it resets the PMU or another thing inside the Mini. If I do that, my Mini starts with the fan at top speed. In MacOS SMCFanControl or Macs Fan Control shows neither fans nor temp sensors, but the Mac works fine and shut downs and restart as when it was new (except from the fan) until I remove the PSU. Then I have to reset the PMU again.

Is the logic board fried, or there's something else I can try?

Thanks in advance for the help.

P.S. I found some working logic boards like mine on Ebay for around 60 Euros including shipping....

Sorry for the late answer, but I was on holiday...

Here's a photo of TG Pro: 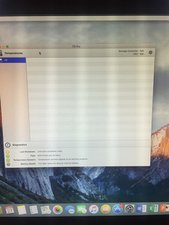 First did you follow this IFIXIT guide: Mac mini Model A1283 Hard Drive Replacement? If you jump down to Step15 &16 it describes the process of disconnecting the thermal sensor which you need to transfer to the new drive. If you did you don't need any software to control the fan.

Who's drive did you put in (make & model)? And what was the OS-X version your system is running now?

Wow! Haven't seen a blown SMC in quite awhile. Your SMC services are no longer working at all! This is a logic board repair or replacement. Sorry ;-{

Hi! Thanks for the quick answer.

Yes, of course I transferred the old sensor to the "new" SSD. It's a Crucial M4 branded as Micron RealSSD C400 256GB. It works flawlessly with macOS 10.11. The problem isn't about the fan control, is the fact that the Mini starts only after I do the PMU reset (press for 5 seconds the power button while inserting the power cable, release the button and press it again to turning it on) AND with the fan at max speed...

Good! I wasn't sure what you had done. This is a common oversight when upgrading a drive.

The reason the system needs a SMC reset to get it to boot up every time it has forgotten the failure condition which is present. SMC services can force the system into a hard off condition when running in the given state would be dangerous for the system.

So you need to re-think your current actions to force things. Like removing the SMCFanControl or other over-riding software of the fan's. Instead we need to review what the sensors are telling us, which is why I prefer TG Pro. Here we want the see what happening with the sensors and the fan. Post a screenshot of the full main screen so we have something to work off of.