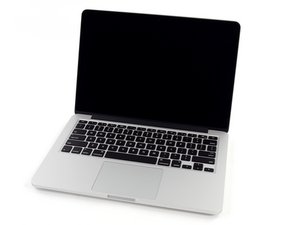 Hi all. Not really a question as I have managed to resolve it but wanted to post up in case anyone else is having the same problem. My MB Pro Retina started randomly going to sleep - and I mean every few seconds. Took to Apple and they wanted to charge £550 to repair it - replacing all sorts of parts that were working fine - touchpad, screen, keyboard and so on. Tapping the space bar or other keys would usually wake it up again for a few seconds, sometimes it would take 20-30 seconds to come back. Hopeless to use, though I found it was fine in Clamshell Mode bar the odd flicker, but I didn't spend £1200 to have a desktop!

Bought a pentalobe driver on Ebay for £5 and with the help of Ifixit tutorials took the machine apart. At this time I had no idea what the problem was, thinking it likely to be a bad connection somewhere and that the old approach of take it apart and putting back together may solve it (after I got it back from Apple it did work OK for a day or so).

Nothing obviously wrong but more digging on the internet made me think that perhaps the problem was with the sensor that detects if the lid is closed. So, with the logic board out I investigated the sensor location. Transpires that it is a small unit on the underside of the logic board mounted between the Thunderport and the USB port on the left of the laptop. Operated by a magnet in the cover (found the switch by using a paperclip to locate the magnet and then working out where the sensor must be).

Not sure if the sensor is a reed switch or a hall effect unit or something else but I sprayed the area with various contact cleaners, isopropyl and an anti-static cleaner that I happened to have. Dried off with a hair dryer and put it all back together.

Been working perfectly ever since.

It may be possible to "free up" the switch without taking the PC apart by spraying cleaner in through the USB port - worth a try but let it dry, or dry, it before using.

Hope this is of help to someone. I couldn't find anyone else that had posted with exactly the same problem - or perhaps rather that there were no solutions available other than software tweaks all of which I tried!

I have had 8 months of misery with the MB but am now happy again!

This is totally ridiculous, have been having the problem among our entire development team for some time now. My work around was just keeping the laptop shut and using external monitors but that's not a solution and then we're unable to use the built in webcams, which is also totally unacceptable.

Thanks a lot for posting this. I do not think its in the cards for me but is extremely valuable to know what the issue is and not to go to Apple for help resolving it.

Thanks for the positive response. I guess that the Apple guys could fix it fine if they are given the correct prompt, so if you can't fix it yourself and I guess it's not for the feint-hearted (and by that I don't mean you, but others that may not want to pull a Mac apart!), Apple could probably sort. Although an "independent" is likely to be more willing to simply clean the components. When I went to Apple they told me they had to hand it back "as good as new" hence wanting to replace loads of parts that weren't actually faulty!

same issue . I would sit down to work and after a few seconds or minutes the computer went into sleep mode while typing or scrolling!!

My problem was I has a device charging in the left USB port. This device has a magnet inside. very time I sat down I put my device Ito USB port. Once I lay it down on the left of the keyboard and the Mac went to sleep.

Problem was the magnet in device I was charging was making the sensor think I closed the laptop. K

Moral of the story - keep magnets and devices containing magnets away from left side of keyboard and left USB port.

Just seen that my "question" has not been answered so people may not see the solution! Sorry, probably should have posted up the solution as a fix rather than as a question. Hopefully now it will appear as a solved problem. Regards, Hector

This solves my question about the location of the hall sensor. I'm going to see if the machine gets broken by just unsoldering it before I buy a new machine.

Insomnia X is keeping my machine on by interrupting the suspend cycle every 30 seconds, but it causes a screen flicker every time which is getting very annoying.

Hello guys! I'm experiencing the same problem but the only difference is that i'm using 15 inch model. Such apps as InsomniaX and so on don't help at all. The screen is flickering all the time. I successfully diassembled the laptop, but unfortunatly i can't find the hall sensor. Since you had the same problem, would you be so kind to have a look at the logic board (photos attached) and advise where it is. Many thanks 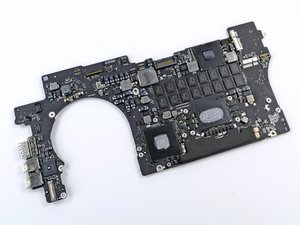 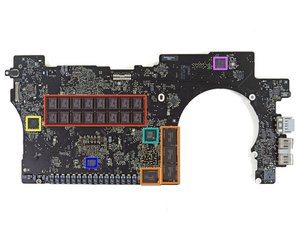