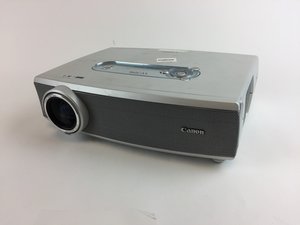 The Canon LV-7210 was released on September 2003 and is a digital projector. It comes in the color Silver and has XGA 1024x768 resolution. The repair requires screwdrivers.

Why is my image blurry when projected onto the screen?

When I go to project my image onto the projector screen, it looks blurry and won't come into focus no matter how much I adjust the focus/zoom of the lens.

If the unit can not seem to focus no matter how much you adjust the lens please verify that the lens itself has not been scratched or damaged. If the lens is in good working condition then unplug the unit to remove power and wipe the lens with a cleaning cloth and a little bit of lens cleaner. But please be careful not to use too much cleaner because harsh chemicals will damage the lens. You can also replace the lens cover if the lens cannot be cleaned by hand. Lastly verify the actual connection of all the video wires and if they are secured correctly try using a different video wire to verify the unit's video wire has not gone bad.

Sounds like you are either too close or too far away from the screen.

Could also be caused by a low-quality screen.

Is the image you are using clear and in focus? Usually not possible to "clean-up" a poor quality image with a projector.

The big question with focus issues is “has the projector ever focussed properly?”

A while back we bought a number of projectors to put into reserve to replace our ageing Dell 1409 units which were starting to show DLP failure issues. I won’t mention the brand as this issue may be isolated to this one product line, but it’s a very well-established name in the imaging field.

Around 18 months passed before we fitted the first of these new units but we were immediately faced with two problems. Two big problems.

The first issue was with focussing. Absolute focus simply wasn’t possible, even with the projector set in the middle of its zoom range, and bear in mind this was a brand-new unit.

The second issue was the fact the projectors were now out of the manufacturer warranty period and our supplier didn’t want to know, quite understandably.

After deploying several units it became apparent they all had focus issues to varying degrees and there was little consistency between sample. We were especially surprised after fitting one particular unit from the same batch that had absolutely perfect focus, but this was the only one that didn’t have issues.

The moral of this story is don’t assume that just because an item is new it’s going to be perfect and will perform as expected - and definitely don’t wait until the warranty has expired before testing that everything works okay.

As for focus issues like this, damage and contamination on the front element really doesn’t affect image quality to the degree you may expect. If you need convincing take a look on the LensRentals blog to see just how much damage a lens can take before it becomes unusable (spoiler, it’s a lot).

The issue with our units is misalignment of the lens elements and groups, and nothing to do with damage or contamination as this wasn’t a factor as ours were new and unused.

By the way, input connections have NO bearing on the optical quality. As an example you could use a VGA input with a damaged cable on a good working unit, and while it may display garbage with missing colour channels and be out of sync it will still be sharp garbage.

The bottom line is if you can’t focus a projector that’s otherwise correctly installed the primary causes are manufacturing defects (it’s never focussed correctly) and impact damage (it focussed correctly once upon a time before it got dropped).