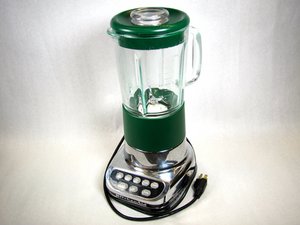 The KitchenAid KSB5CR is a five-speed blender manufactured in 2006 by KitchenAid. It is available in black and chrome color schemes. Repair of this device requires screwdrivers and prying tools.

The blender leaks and won't seal.

I'm sure I screwed the bottom part on tight and the gasket appears to be ok, but the blender leaks uncontrollably when I pour liquids into it.

Take it off the stand pour water into it over the sink and observe where the leak is coming from.

I had a similar problem, this morning instead of dripping it was pouring out of the jar. The middlescrew appeared to be loose, the one which is connected to the knives, and you should tighten it COUNTER clockwise! My problem was solved...

The important thing to is to hold the blades in one hand to prevent them from turning and use your other hand to turn the black 8 sided nut located on the outside of the jar counter clockwise so it becomes hand tight.

Whoever you are- thank you SO MUCH

You just need to turn it further some 55 degrees and make sure the washer is in place.

This solution only works for me part way through making a smoothie. It comes loose at that point causing it to leak again. Any idea how to make it work longer?

The first thing to check is the order: the gasket should sit on the jar edge, then the blades, then the retaining ring. Per the directions when changing an automotive oil filter it will work best if you put it together while all the parts are wet because that lubricates the rubber. One problem I’ve seen is that there can be a build-up of material on top of the metal baseplate of the blade assembly so it’s not smooth anymore. Just scour that off until it’s smooth, also the bottom edge of the glass jar.

But the final show stopper in my case after spending half an hour on those is that the seal which fits around the shaft in the blade assembly wears enough so it starts to leak. I don’t think there’s a fix other than replacing the blade assembly, but having a spare, maybe meant for a different purpose is good because swapping them is a quick thing to try. We happened to have a milkshake blade with little wear, putting that in stopped the leak. The seal is made to tight tolerances but if you can feel a little slop in there when you try to wiggle the blade sideways that’s enough. It’s still perfectly usable unless you want to put a blenderful of whatever in the fridge, then it will leak. Try a new blade. Actually we have an Oster blender, my search took me to fixes for a Kitchenaid, I don’t know how different they are.