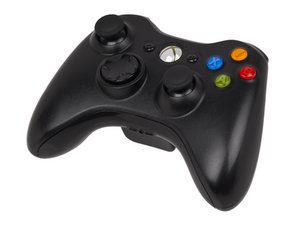 Released on November 22, 2005, the Xbox 360 wireless controller is the primary game controller for the Microsoft's Xbox 360 home video game console.

How to fix the left bumper

My left bumper feels kind of stuck in it and it won't register unless you hit it really hard. How can i fix this?

Sounds like the bumper may be broken in the controller, but try to clean it out in case something got stuck in there causing issues with the contacts. Bumper Panel Installation. Worse comes to worse you may be able to pick up another broken controller on the cheap for spare parts.

i think that your bumper isn't touching the micro button... just take thin cardboard or paper with double sided tape on half of it. put that on the analog stick inside cover. it worked for me. or get spare parts

This concept worked for me, but I used Uhaul brown moving tape (just happened to have some in a home repair box). I cut a small square that was about 1/8 inch by 1/8 inch. Painters tape works well too.

I had the same issue and I just put a small "mound" of glue on the micro switch. I let it dry and then put the controller back together.

All this did was make the micro switch a little longer so the bumper could reach it.

i have to do this, i was playing dark souls 1 and my attack button (RB) isnt registering well the input, i had to press it very hard and some times registers 2 inputs, guess is almost dead, any microswitch will do the trick if i try to replace it or has to be a specific one?

Look at the front of the control cabinet. In the part where it rests on bumper, there may be attrition. Also the micro-switch may be damaged

There is a gap under the top bumpers that let you take the remote apart. The problem is that when the remote gets thrown or droped that gap will get bigger, the cause is that there is nothing holding that together so when that happens the gap expands and doesnt let you click the top bumper. The button starts to get lose and its hard for you to use it, when the bumper doesnt work or barley works then it makes some gameplay very hard. The fix to this problem is to ether tighten up the screws in the remote or to find a way to sqeeze the gap back to the position that its supose to be in. You can also find somthing to put inside the gap so that your top bumper is set in the right place to hit in the right spot. You can use a piece of paperor a small piece of plastic.

Ive tried this before, many times already actually... to estimate about 5 times of opening the xbox controller. I tried fixing the micro-switch, placing cardboard, yet to no avail... its &&^&^$^ irritating

I had a similar problem with the wired controller I use for pc games. I took it apart and, because I'm a lunatic, used my teeth to carefully pull the microbutton closer. The bumper works again, and I'm happy enough, but it's not really something I recommend normal people do.

The bumpers use ordinary push-button switches, which can wear out after 100k presses or so. If it feels like you have to press it harder than normal, and the problem gets worse over time, the metal contacts inside the button may be wearing away.

It is difficult, but possible, to replace the bumper buttons. Fortunately, the button itself is a jellybean part: search for 6x6mm SPST tactile buttons, and pick a 4-pinned one with a similar appearance to the one on the controller board.

The bumper button is attached to a metal bracket with two tiny plastic pegs: slowly pry them apart. Then, you'll need to de-solder the two joints between the button's legs and the reverse side of the board. To access both pins, you'll need to move the plastic trigger assembly aside by un-clipping it from the board near the bumper button and gently but firmly pushing it up and off the pin. Do not attempt to remove the plastic trigger assembly, because it is connected to a potentiometer which is soldered onto the circuit board. 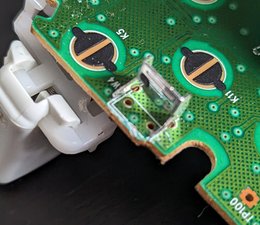 Once you have removed the worn-out bumper button, you can slot in your new one and solder it on. I also used a dab of hot glue to attach the new button to the old one's metal bracket - if you lick your finger you can press the glue into the gap while it's soft, and hot glue can be removed if the controller lasts long enough to need another bumper button. 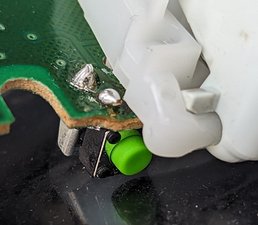 You need some desoldering tools, but it's doable.

You unscrew it.then take out the spring and clean it.

Next you tale out the (RB) button,clean that piece.

Then you put the spring in first...then put the (RB)button not top of the spring(be sure it shows/pokes out so you can see it.finnaly, screw the pieces back together

How the controller made into 2 pieces,that's why there are screws to hold it in place

Hey Justin! I think that’s for the trigger, not the bumper button. What you said helped me clean and replace the spring on my right and left triggers, thank you!

When I pulled my controller apart, I noticed there was no spring for the bumper. I’m assuming the plastic was manufactured in such a way so there was “memory” in it, so when pressed and released, the plastic piece returns to its home position.

It won’t work for the game rb button